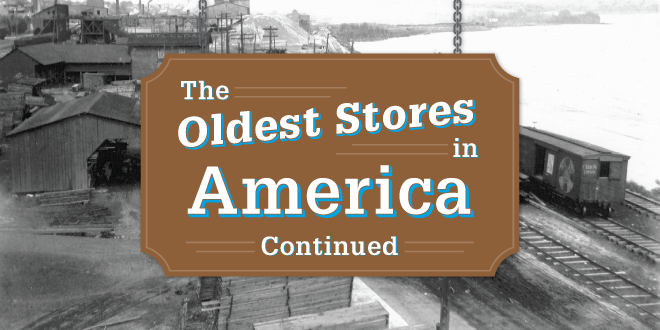 Check Out Some of the Oldest Stores in America

Even before the signing of the Declaration of Independence, retail began establishing its roots in the U.S.

Impressively, some of those early businesses are still in operation, having survived by evolving for more than two centuries.

The July issue of Hardware Retailing magazine highlights two family-owned operations that have stood the test of time: Cowls Building Supply, which started in 1741 in Amherst, Massachusetts, and Tinsman Bros. Inc., which opened in 1785 in Lumberville, Pennsylvania.

Though not quite as old, many other independent home improvement retail businesses are still operating after more than a century. Read the stories below to learn about their histories, hardships and the resilience that has kept them going to this day.

If you believe your business should be included in this list of oldest independent hardware stores, home centers and lumberyards, please contact Hardware Retailing profiles editor Renee Changnon at rchangnon@nrha.org.

Renee Changnon is the retail outreach coordinator for NRHA. She meets with retailers in their stores and at industry events and introduces them to the services NRHA provides. Renee previously worked as a member of the NRHA communications team. She earned a degree in visual journalism from Illinois State University, where she served as the features editor for the school newspaper. After college, she implemented marketing and promotions initiatives at Jimmy John’s franchise locations across the country. She enjoys exploring books with her book club, Netflix marathons and hosting goat yoga at her apartment complex. Renee Changnon 317-275-9442 rchangnon@nrha.org
Previous 2018 Young Retailer of the Year: Diana Newton
Next Ace Hardware Corp. to Expand Ohio Distribution Center