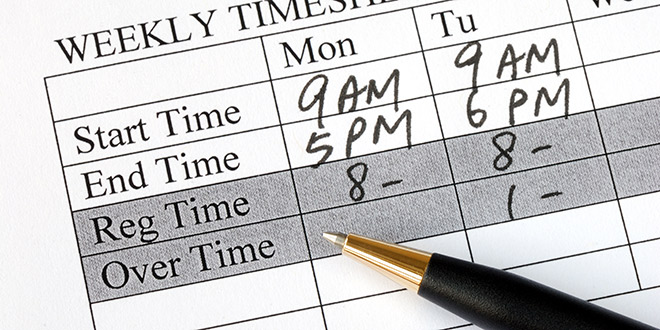 Change of Plans for Overtime Law

U.S. business owners who were preparing to pay extra for employees who work overtime don’t have to make changes—yet.

Modified overtime laws were scheduled to take effect Dec. 1, but a federal judge’s Nov. 22 order has paused implementation of the new rules throughout the country. The new rules came from the U.S. Department of Labor in May.

Texas federal Judge Amos L. Mazzant sided with 21 states, which argued that the Department of Labor “had no statutory authority to set that salary level as the threshold or to establish an automatic updating mechanism for setting threshold salary level for overtime pay in the future,” according to The National Law Journal.

The Department of Labor opposes Mazzano’s action, which is currently a delay of the regulation changes that might become a more permanent halt, The New York Times reports.

“While the injunction is only a temporary measure that suspends the regulation until the judge can issue a ruling on the merits, many said the judge’s language indicated he was likely to strike down the regulation,” The New York Times article says.

If they take effect, the law changes would require employers to pay workers time-and-a-half for hours worked over 40 hours per week if they earn less than $47,476 per year. Under the new regulations, an employee would have to earn $913 per week or more to be considered salaried, or overtime exempt.

Kate is profiles editor for Hardware Retailing magazine. She reports on news and industry events and writes about retailers' unique contributions to the independent home improvement sector. She graduated from Cedarville University in her home state of Ohio, where she earned a bachelor's degree in English and minored in creative writing. She loves being an aunt, teaching writing to kids, running, reading, farm living and, as Walt Whitman says, traveling the open road, “healthy, free, the world before me.”
Previous Retailer Donates Dead Inventory
Next Smartphone Grip