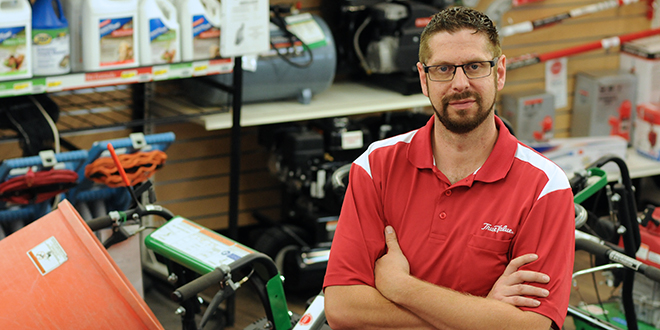 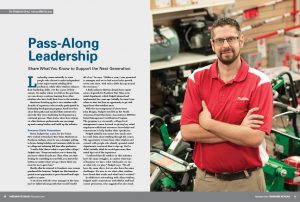 Share What You Know to Support the Next Generation

Leadership comes naturally to some people who choose to make independent home improvement retailing their profession, while other retailers enhance their leadership skills over the course of their careers. No matter where you fall on the spectrum, you can always continue learning from other retailers who have built their lives in the industry.

Hardware Retailing spoke to two retailers with decades of experience who recently participated in leadership development programs. Read how they chose their paths and reached their current roles and why they view leadership development as a continual process. Their stories show how relying on other business professionals can encourage up-and-coming leaders and build up the industry.

Everyone Starts Somewhere
Daren Padgett has a plan for his future. He’s worked at Roselawn True Value Hardware in Roselawn, Indiana, since he was a teenager, putting in hours during holidays and summers while he was in college and returning full time after graduation.

“I really didn’t know what to expect after college,” Padgett says. “Everyone teaches you to dream big and move where the jobs are. Then when you start looking for something in your field, you start at the bottom no matter where you go. I knew there was room for me to grow here.”

Shortly after he returned to Roselawn, new owners purchased the business. Padgett saw this transition period as an opportunity to prove himself and begin a path to a career.

“I sat down with the store manager at the time, and we talked about growth that would benefit
all of us,” he says. “Within a year, I was promoted to manager, and we’ve had record sales growth every year since, with only a little hiccup around the recession.”

A fresh endeavor that has already been a great source of growth for Roselawn True Value is its rental department, which Padgett planned and implemented two years ago. Initially, he wasn’t sure where to start, but then an opportunity to get vital input from other retailers arose.

Padgett initially was unsure how much more he could learn about retailing through the course. The opportunity to learn from other retailers and connect with people who already operated rental departments convinced him to sign up. But he didn’t initially think he would gain more than rental tips out of the experience.

“I realized that all retailers in this industry have the same struggles, no matter what type of business we have, what wholesaler we use or what role we play,” Padgett says. “We all have the same drive, but we also have the same challenges. It’s nice to see what other retailers have found that works and what hasn’t worked.”

In addition to networking with other retailers, Padgett made connections with NRHA staff and course presenters, who suggested he also reach out to the American Rental Association for guidance on setting up his new department.

“I’ve kept in contact with several retailers from the program who were already operating their own rental departments,” he says. “It’s great to be able to reach out and see what’s working for them, find what equipment to buy or not buy, what POS systems to use. We’re all in such different markets, so it depends a lot on the clientele, but it’s still great to have those resources.”

Meeting retailers from diverse backgrounds who also operate rental departments helped push Padgett to the next step as a leader. Since completing the management program, he’s grown his rental department even more, to the point where party equipment is rented out nearly every weekend during the summer. He’s also become a resource for other retailers looking to expand into the category.

“It’s nice to have other retailers contact you,” he says. “I was that person a few years ago.”

Padgett has also participated in his wholesaler’s young retailer group for the last eight years, and recently, he has been able to give back. At the biannual buying shows, young retailers meet for a casual meal and get a chance to learn from each other about business and the industry. Padgett is happy to be a part of the group and to impart his knowledge as a retailer with more than 20 years of experience.

“It’s great to be able to give advice to the next generation. The growth of the industry is young retailers,” he says. “This group gives me a chance to answer any questions they have. Maybe they just bought a store and didn’t know what to expect. Some of them aren’t at the owner level or aren’t children of owners. We need to get the next generation or two interested to help the industry grow, and sharing what we know is part of that.”

Padgett says he wasn’t expecting personal development to be a result of the industry programs and groups he participated in.

“At the time I thought, ‘I’ve been in this industry for a while; what else is there to learn?’” he says. “I realized that there is always something to learn, even if it’s personal growth.”

He has become more involved in his community, volunteering at the local American Legion hall, where he serves at the fish fry every other Friday. Through his volunteering, he’s become more connected to his customers, which he says has helped everyone see each other in a different light.

“I’ve learned more about my customers who I’ve dealt with for more than 20 years. They’re not just customers,” he says. “Sometimes, they want to call to talk instead of just getting a part for their dishwasher.”

With his tenure as manager approaching two decades, Padgett says his next step is to take ownership of the business. He says he has no doubts about the future of the business well beyond that point.

“Every decision I make is for future growth and the long-term success of this business,” he says. “When it comes to being a leader, you can’t think you’re better than everyone else. You need to sit and listen to the details from everybody involved. Nobody is ever finished with leadership development.”

Melanie is the communications and content manager for the North American Hardware and Paint Association. She joined the NHPA team in 2016 as an editor for Hardware Retailing and now helps lead the communications team to deliver relevant, timely content to the industry.
Previous High-Performance Blender
Next Taking Cues From Outside