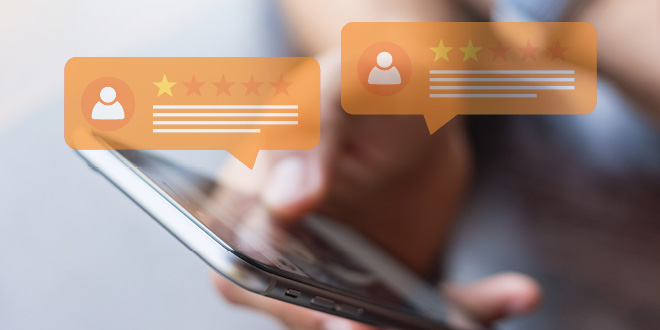 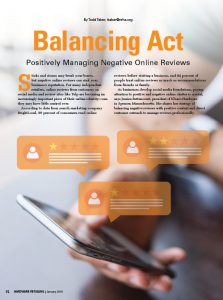 Sticks and stones may break your bones, but negative online reviews can sink your business’s reputation. For many independent retailers, online reviews from customers on social media and review sites like Yelp are becoming an increasingly important piece of their online identity—one they may have little control over.

According to data from search marketing company BrightLocal, 90 percent of consumers read online reviews before visiting a business, and 84 percent of people trust online reviews as much as recommendations from friends or family.

Heard It Through the Grapevine
Bettencourt’s grandfather founded Klem’s in 1946, and she spent her childhood learning the ins and outs of the busy retail operation. She cashiered as a teenager, then worked in receiving and later as a department manager before becoming president in 2011. Over the years, she’s seen the business adapt to changing customer behavior and technology, including the emergence of social media.

Klem’s has been active on social media for about 10 years, and focuses on offering its 15,000 Facebook followers a mix of lighthearted content, product information and store news. She agrees independents need to keep a close eye on online reviews to manage their online presence effectively.

“I think you have to pay attention to online reviews,” she says. “We try to make sure our social media presence is neutral, fun and always focused on positive news. I think it’s easy to post something that can be taken the wrong way, so we try to avoid that.”

But what she and the Klem’s team post is only one portion of their social media presence; in its time online, Bettencourt says the business has received occasional negative reviews. She says establishing a positive online atmosphere with your own posts is one way to counter these reviews. But she also recommends addressing the situation directly to ensure a customer feels acknowledged and to defend your business’s reputation.

Bettencourt recalls a time where a disagreement between customers spiraled into a negative—and inaccurate—online review. A crying child led to an altercation between two customers, and the Klem’s staff ejected a shopper who cursed loudly in the store. That shopper told a friend she was ejected because of her crying child, and that friend then posted a Facebook review saying that the business regularly throws out customers with crying children.

“The fear was that the review would go viral,” Bettencourt says. “We see that every day online, and people just repost things without knowing if it’s true or hearing the other side of the story.”

Bettencourt says it was critical to reach out to resolve the issue by explaining the business’s actions clearly and truthfully.
She also responded directly to the negative online review, an action she hoped showed other customers that the business was both responsive and honest.

Bettencourt says that kind of negative and false review is an isolated incident, but she recommends retailers respond to all online comments professionally.

“For more general comments, it’s always about finding a way to help a customer,” she says. “If they had a bad experience with a product, we offer to refund it. If they had a poor experience in the store, I ask them to contact me directly. As long as you’re showing customers that you know you made a mistake and are providing solutions to fix it and offering your contact information, then other customers see you’re proactive.”

To Delete or Not to Delete
Bettencourt says that she’s been tempted to delete negative reviews in the past, but has decided against it.

“I have never removed a review, but I have blocked someone from making comments,” she says. “I’ve had reviews that called me a crook, that attacked me personally, but I’ve left them up.”

Bettencourt says deleting comments can be seen as ignoring a problem. Instead, she blocks users who post inappropriate content.

“Some people are just looking to pick a fight. It’s important to be the bigger person and rise above it,” she says.

If retailers find they truly need to remove a review, Bettencourt recommends first reaching out to the customer online to explain the reason for the removal and invite them to discuss the matter further with a member of a business’s management if they wish.

Bettencourt recommends retailers use the same tactics on social media as on review sites.

“Take the same strategy no matter which site you’re on,” she says. “Stay positive, because people can see what you’re saying, so make sure you’re setting a good example.” 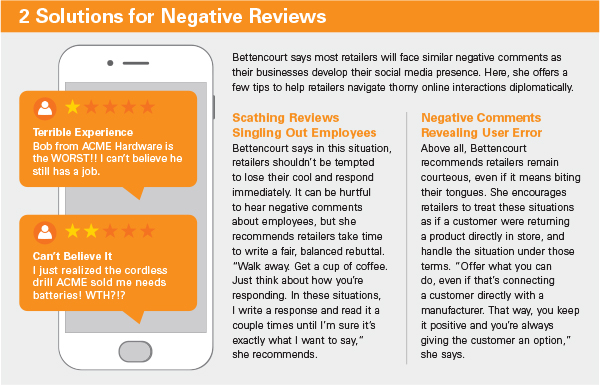 Todd is trends editor for Hardware Retailing magazine. He graduated from Indiana University where he majored in journalism and French. Throughout his career, he has aimed to highlight small businesses and their community value. He joined NRHA in 2017.
Previous Go Behind the Scenes With a Retailer Supplying the Entertainment Industry
Next Make Employee Training a Key Part of Your 2019 Plans 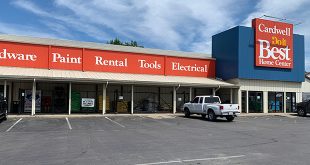