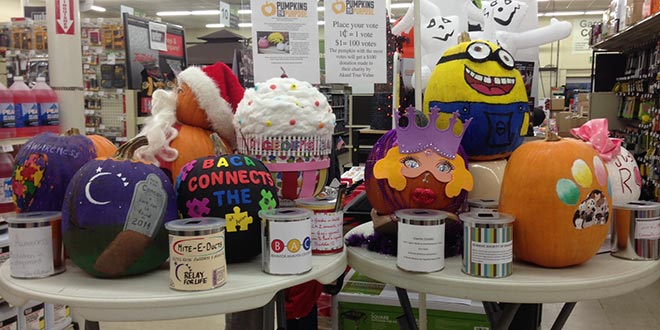 Retailer Promotes Pumpkins for a Purpose

Since 2013, the Zionsville, Indiana, store has promoted Pumpkins for a Purpose, a fundraiser and pumpkin painting contest.

Organizations and people from the community bring to the store pumpkins that are painted with the themes of their choice. Participants bring small cards providing information about the organizations that will receive donations through the pumpkin painting contest.

The fundraiser idea came to Leigh Ann Akard, co-owner and manager of Akard True Value, during a meeting. She had heard an idea about painting pumpkins to promote breast cancer awareness.

“I thought it was such a cool way to raise money for breast cancer awareness,” Akard says. “However, I know there are so many different organizations and causes out there looking for support, donations and awareness. I wanted to expand upon the idea.”

She wanted to give people in her community the opportunity to promote and support causes that are important to them. The store displays the pumpkins with donation cans.

“Each day during the contest, we’ll promote one pumpkin on our Facebook page,” Akard says. “All of the pumpkins submitted will be displayed. People can vote on the pumpkin they like best. It’s a penny per vote. All the organizations keep the money submitted to vote for their pumpkin.”

The organization with the pumpkin that receives the most votes gets a $100 donation from Akard True Value.

“This event is a win-win for the store and our participants,” Akard says. “We are happy to help community members raise awareness for their special causes. And we have even more people walking through our business.”

Renee Changnon is the retail outreach coordinator for NRHA. She meets with retailers in their stores and at industry events and introduces them to the services NRHA provides. Renee previously worked as a member of the NRHA communications team. She earned a degree in visual journalism from Illinois State University, where she served as the features editor for the school newspaper. After college, she implemented marketing and promotions initiatives at Jimmy John’s franchise locations across the country. She enjoys exploring books with her book club, Netflix marathons and hosting goat yoga at her apartment complex. Renee Changnon 317-275-9442 rchangnon@nrha.org
Previous Beekeeping Kit
Next Cooling Pet Bed