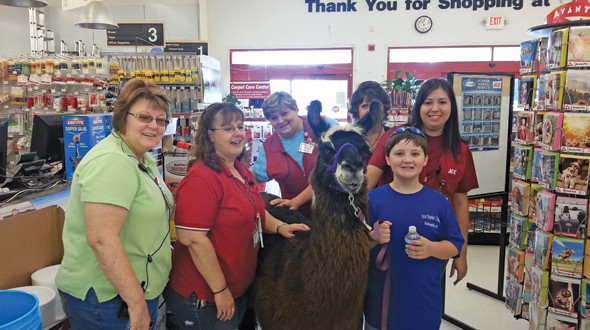 Customers at Jared’s Ace Hardware in Bishopville, S.C., know the store is pet-friendly, but recently the store took the concept to a whole new level, bringing in llamas, donkeys, goats and more.

In September, store staff worked with a local animal rescue to host a Pet Appreciation and Pet Adoption Day. Along with a microchipping station and a few kennels with animals available for adoption, the event included a dog-washing station, a petting zoo, face-painting and live music.

“The front lawn of our store is two-thirds of an acre, and it was completely full that day,” store owner Jared Smith says. “We had well over 1,000 people who visited, and we raised quite a bit of money for the local animal shelter. We’re in a low-income, rural community, but we still raised $1,400.”

The money came from donations and the costs for microchipping or dog-washing.
Smith says the key to an event like this is to let the store sell itself.

“We didn’t break in every 30 minutes with an ad; it was a community event everyone enjoyed,” he says. But sales were still up 25 percent compared to that same Saturday the previous year.

Smith hosted a similar event in the spring after forming a relationship with a local animal rescue, Bishopville Animal Rescue Krew (B.A.R.K.).

“We’ve been venturing into the feed business at our store, and we approached the shelter about buying feed from us, and then we started talking about an event like this,” he says. “It was so successful last spring that we decided to do this bigger one in the fall.”

While there were only a couple adoptions that day, he says the event offered the animal shelter good exposure as well as additional funding.

He suggests other retailers who want to do something similar team up with local shelters or rescue groups and ask how their stores can help. Hosting an event brings attention to both the cause and to retailers’ stores.

Liz is the special projects editor for Hardware Retailing magazine. She reports on news and trends, visits retailers, and attends industry events. She graduated from Xavier University, where she earned a degree in English and Spanish and was a member of the swim team. Liz is a Louisville, Kentucky, native who lives in Indianapolis with her husband and two children. She enjoys swimming, reading, doing home improvement projects around her house and cheering on her two favorite basketball teams, the Kentucky Wildcats and the Xavier Musketeers.
Previous ‘Tis the Season to Shop at Woodstock Hardware
Next Solar Panels Reduce Costs, Energize Sales at Maryland Hardware Store