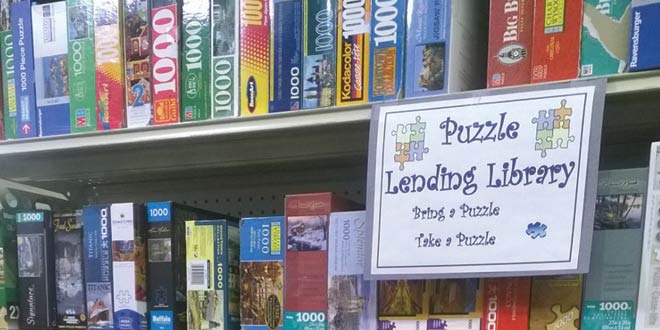 Puzzles, like books, are items many consumers use just once before putting them in boxes or on shelves to collect dust. But six years ago, Valley Hardware & Supply in Halstad, Minnesota, created a solution to this one-time-use conundrum.

Customers can buy puzzles at the store, so the idea for the library began when those customers would come in the store and talk about the extra puzzles they had sitting at home.

This inspired employees to create a puzzle-lending library, where customers can borrow puzzles to try at home and bring back once they’ve finished them.

“We have quite a few people who buy puzzles every year because they want first-run puzzles, so they always have some to donate to the library,” says John Hinkley, owner. “Puzzles are a good activity during the winter months, when people are cooped up in their houses.”

The library became so popular that what started out as a 4-foot section doubled in size over the years (although Hinkley recently scaled back to the original 4-foot area to ensure the library doesn’t take up valuable retail space).

He says the only drawback of the library is that the store can have too many puzzles. He does swap puzzles out with ones stored in the back room, throws away damaged puzzles, and occasionally donates extra puzzles to a local thrift store.

Hinkley says some touching stories have come from this puzzle library.

“Two women would come in every other week and leave with three or four puzzles,” he says. “However, during the spring we didn’t see them for some time. They finally returned with a folder that included pictures of all the puzzles, which they had completed with their father at the nursing home. The women said the puzzles entertained them, and their father participated every once in a while.”

Lynnea is the senior graphic designer for Hardware Retailing magazine, where she works on the layout and design of the magazine and other custom publications. She also does print design for NRHA’s marketing materials, programs and other in-house projects. Lynnea graduated from Ball State University with a degree in Graphic Design. She lives in her hometown of Greenwood, Indiana. During her free time, she enjoys designing, painting, reading and volunteering at her family-owned childcare facility.
Previous Metal Level
Next Bright Digital Blender