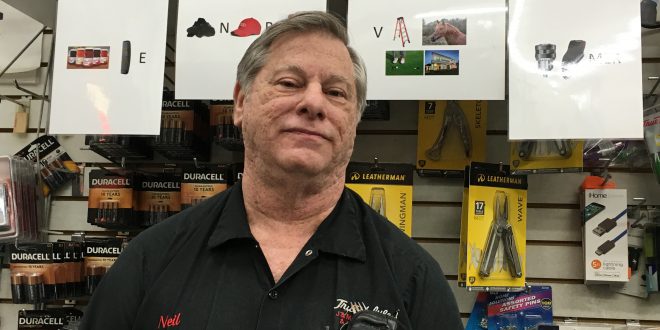 Curiosity is a powerful motivator. So, when Neil Schneider started putting rebus, or pictogram, puzzles in the front window of his store, J&M Hardware & Locksmiths in New York City, he hoped they would at least make customers curious enough to come inside and find the answer.

“One of our first puzzles was a roll of paper towels with the word ‘mutiny’ across the top,” he says. “It was ‘Mutiny on the Bounty.’” Schneider also posted a sign that there were more puzzles inside. Soon, he had attracted not only some new customers, but also a loyal following of puzzle solvers.

Soon, Schneider began creating a new set of puzzles every few weeks and got one of his customers to help design them.

“Once we had a grade school teacher who took a copy to hang on his classroom door,” Schneider says. “It was a good way to get kids to think and maybe teach them something they didn’t know, especially with the frequent cultural references.

Schneider also says the puzzles help create connections. “When you’re helping a customer solve a puzzle, you’re not just the businessman and they’re not just the customer.
You’ve made a more personal connection.”

Can you guess the answers to the puzzles below? The first slide will give you the category as a hint, and the next slide will have the answer.

Jesse Carleton has visited independent hardware retailers, conducted original research on the industry and written extensively about the business of hardware retailing. Jesse has written for more than a dozen of NHPA’s contract publishing titles, all related to the hardware retailing industry. He also was instrumental in developing the Basic Training in Hardware Retailing courses now used by thousands of retailers across the country.
Previous Portable Beverage Cooler
Next Your Special Events Survival Guide