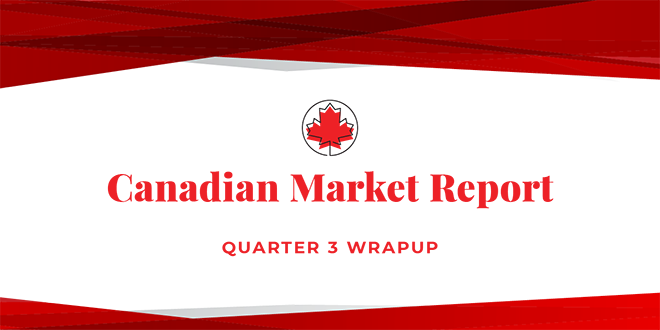 Each quarter, Hardware Retailing checks in with the editorial team at Hardlines, a Canadian publication focused on home improvement industry trends. In this installment, learn about the challenges Canadian retailers are facing, from supply chain interruptions to wildfires to technology. For more Canadian home improvement market news, visit hardlines.ca.

It seems like there’s a light at the end of the pandemic tunnel. Events are starting back up, activities are returning, but we can’t get too excited yet.

Depending on the province, restrictions may be minimal, but that can all change in a heartbeat. This comes on the heels of an already buoyant business climate for dealers. According to the 2021 Hardlines Retail Report, 2020 growth by hardware and home improvement dealers in Canada set a record. The sector faced a year of unprecedented sales activity under COVID-19 in 2020, which resulted in an average sales increase of more than 15 percent from all stores measured in the survey.

Yet, the industry still has some large challenges. For many, difficulty getting product is at the top of the list. These days, supply chain challenges are a continued threat and shortages are expected well into 2022.

While delays overseas have been the biggest concern in the supply chain, dealers have faced further complications domestically. Lumber prices just started to decline after a year of inflation as sawmills caught up with demand. But wildfires throughout the country have posed a challenge for supply chains. At one point, some 300 fires were blazing in western Canada, and northern Ontario saw more than 150 wildfires this summer, which is unusual for the province. The wildfires in British Columbia left a big dent in the lumber industry.

Another challenge I have noticed for the home improvement industry is how it struggles with adapting and modernizing. As technology grows, the industry still doesn’t seem to embrace innovation. Some companies have pushed innovation, ranging from launching apps to connect with pro customers to implementing crucial e-commerce advances. While these examples of innovation are out there, we’ve found that many dealers are woefully behind with technology.

Bernie Owens, president and CEO of TIMBER MART, agrees. One area he has seen his dealers struggle with is cybersecurity. He believes all dealers must stay on alert to avoid being hacked or becoming a victim of ransomware.

“I encourage all businesses, regardless of who you are, whether you’re a small business or a large business, to keep cybersecurity training top of mind and give your employees the knowledge they need to help protect the business,” says Owens.

Eric Palmer, vice president and general manager of the Sexton Group, discusses how people are spending their money as more sectors open up.

Sexton’s members include more than 400 dealers across the country. They are strong in LBM and include some large commodity lumber dealers and gypsum specialty dealers.

Sexton dealers wonder whether spending will continue in the home improvement sector as society opens up and people are able to spend money on other things. Will travel and events cut into the discretionary dollars that people have been spending on their homes?

Palmer says his members remain largely positive about the continued health of the economy. However, “we’re starting
to hear from some of our very large vendor partners that, for some of them, retail is slowing down a little bit.”

The importance of a buying group, and the necessity for size, is greater than ever before, says Owens.

“An independent dealer should be looking at a buying group that offers critical mass to the vendor community, significant volumes, buying power and LBM distribution to assist when they have stockouts,” Owens says.

He says independents can react to their local markets more quickly than a big chain can, but a major concern for these retailers is supply chain security. Over the past 16 months, maintaining supply has been crucial for all dealers, and Owens only expects this situation to worsen in the coming months.

Dealers face new challenges as they attempt to manage their inventories amid rising prices. Costs have to be weighed against long lead times as supply is squeezed. Another concern for Owens’ dealers—and one that retail is facing more widely—is the importance of attracting people to work in their stores and to be part of this industry.

Futura Corp. owner Amar Doman, whose holdings include CanWel Building Materials, one of Canada’s leading LBM wholesalers, is the new owner of the Canadian Football League’s BC Lions. Doman is open about his passion for football—and for the deal itself.

“I’ve been a fan for a long time, since I was a kid,” Doman says. “I’ve been working on this for over six years.”

He says the team needs a boost provided by the attention of a local owner. He talks about the need for a strong sports presence for the province—and especially as a positive influence for young people.

“For British Columbia, having a local owner here for the team was important,” he says.

BeautiTone Unveils Colour of the Year

Melanie is the communications and content manager for the North American Hardware and Paint Association. She joined the NHPA team in 2016 as an editor for Hardware Retailing and now helps lead the communications team to deliver relevant, timely content to the industry.
Previous Annapolis Home Hardware Building Centre Retailer Grows Her Career
Next Planning Events in a Post-Pandemic World