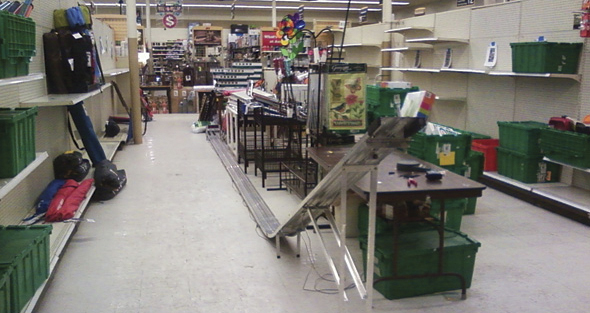 For lovers of car racing, NASCAR, the Grand Prix and the Indy 500, nothing revs their engines like the sound of a starting gun. For many Cub Scouts, however, that sound also means  pinewood derby time.

Enter Northbrook Ace Hardware in the northern suburbs of Chicago. About 20 years ago, owners Ed and Ron Gabek constructed a 35-foot pinewood derby track to fill space in the store’s seasonal department between Christmas and spring. Every year since, Cub Scouts from all over the area have converged on the store for supplies and to try out their cars prior to a big race.

“We have a work table with a digital scale so the Cub Scouts can make sure their cars are making weight—the cars have to be under a certain weight to qualify,” says Stan Livermore, store manager. “The track has an electronic timer on it, and we have a copy of the rules on the table so they can make sure they’re following them.”

Northbrook Ace also carries hammers, nails and lubricants and a 12-foot pinewood derby-specific assortment of decals, weights and other accessories to make the cars go faster and look cooler. The store also sells books and videos to help Cub Scouts learn the physics of the mechanics that make their cars run faster.

To promote the track, the store sends out fliers to Cub Scout dens within 10 miles of the store and press releases to local media. It also hosts pack meetings so boys and leaders can spend uninterrupted time working on their cars and testing them on the track.

For an interim display, Northbrook’s pinewood derby track is a winner in more ways than one: Not only does it involve the community and fill transitional selling space, it also makes Northbrook a destination for specialized merchandise.

“On a Saturday race day, we can have a line of 15 waiting people to use the track,” Livermore says, “and over the course of a day, we can have three to four dozen. For the duration of the display, we’ll have several hundred. It’s a great way to drive traffic into the store.”

Liz is the special projects editor for Hardware Retailing magazine. She reports on news and trends, visits retailers, and attends industry events. She graduated from Xavier University, where she earned a degree in English and Spanish and was a member of the swim team. Liz is a Louisville, Kentucky, native who lives in Indianapolis with her husband and two children. She enjoys swimming, reading, doing home improvement projects around her house and cheering on her two favorite basketball teams, the Kentucky Wildcats and the Xavier Musketeers.
Previous Get Creative When Planning Your Outdoor Living Displays
Next A Rose Is a Rose—and a Mother’s Day Promotion