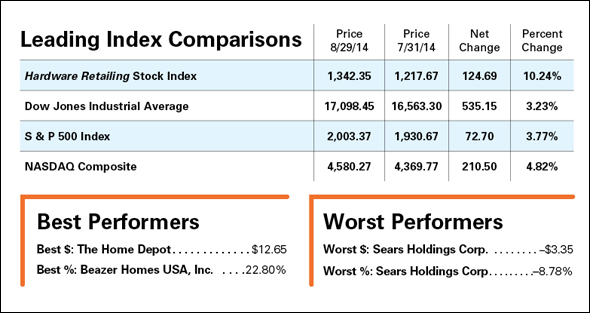 The Hardware Retailing Magazine Index soared in August, jumping 124.69 points, or 10.24 percent, closing at 1342.35, easily a record, and the highest index reading since December, 2013. Only Sears ended the month in negative terrain. The Commerce Department reported that home construction rose 15.7 percent in July, the best pace in eight months. Applications to build new homes were also strong. The National Association of Realtors said that pending home sales increased by 3.3 percent in July, the strongest rate since August 2013; economists polled by Reuters expected a 0.5 percent improvement. Homebuilders in general rallied following a strong homebuilder sentiment index that bested analysts’ expectations. The National Association of Home Builders/Wells Fargo Housing Market index improved to 55 in August, up from a July reading of 53; economists were expecting an index of 53. The gain in the sentiment index was the third consecutive improvement.

Wall Street started August in beaten-down territory over tensions in Iraq and the escalation of troubles between Ukraine and Russia. The Labor Department reported that productivity rose 2.5 percent at a seasonally adjusted rate in the second quarter, following a 4.5 percent tumble in the first quarter. The Conference Board’s index of leading indicators, a gauge of future economic health, rose 0.9 percent in July, the strongest gain since March and the sixth straight increase. “We reached and closed above the 2,000 milestone this week and that gets the mental obstacle out of the way,” said Andre Bakhos, managing director at Janlyn Capital LLC in Bernardsville, New Jersey. “Economic numbers have been positive for the most part, people are drawing comfort from these numbers, using them as a justification for optimism.”

Margot Crabtree is president of Trade Trends, Inc., a financial data services provider. She has been offering market analysis with customized regional and industry stock indices and financial commentaries since 1999.
Previous Millennials and Baby Boomers Moving in Opposite Directions
Next Home Depot and Target Hit By Same Malware 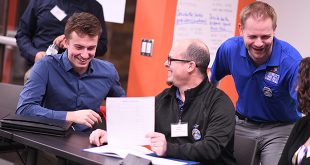