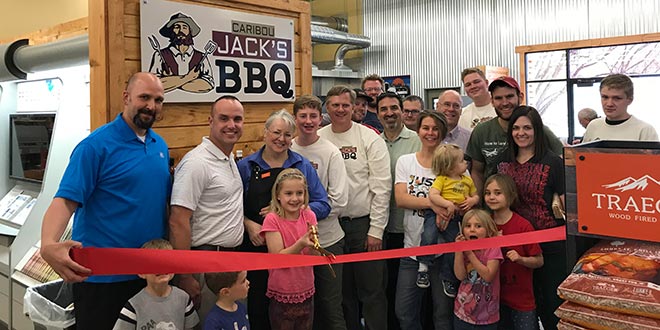 In May 2017, Robert Lau became the winner of the first-ever Reimagine Retail program. A panel of judges selected Lau’s plan to improve his business and awarded him $100,000 to put his plans into action. 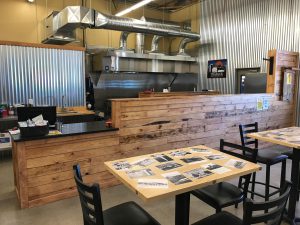 Lau proposed adding an in-store restaurant to Caribou Jack’s Trading Co., the hardware and sporting goods store he has owned since 2010. He hoped the in-store restaurant would drive new customers to his business and serve as a gathering point for the Soda Springs, Idaho, community.

After a year of hard work renovating his store to maximize space, refine the restaurant’s menu and ensure it was ready to serve customers, Lau and the Caribou Jack’s team celebrated the grand opening of Caribou Jack’s BBQ from April 19-21.

“The grand opening was fantastic,” Lau says. “We served about 400 people over three days and everyone had great things to say about Caribou Jack’s BBQ. It wasn’t quite a stampede, but it was steady and that gave my team a chance to get their bearings.”

In the first week of operation, Lau says Caribou Jack’s BBQ accounted for approximately twenty-seven percent of his business’s total sales. As warmer weather arrives and word-of-mouth recommendations spread across Soda Springs, he hopes even more people will visit and try Caribou Jack’s BBQ for themselves.

“Robert’s idea combined a number of interesting factors,” Russo says. “He wanted to serve a need in his community for people to gather and by creating a restaurant within his store, he will now begin to host events for his customers to gather and learn.” 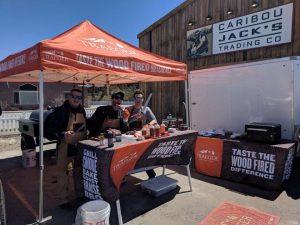 The entire Soda Springs community was invited to visit Caribou Jack’s BBQ during the grand opening and see what Lau and his team had been cooking up for the past year. It all began with a Ladies’ Night, which featured a representative from Rustoleum who explained the possibilities of chalk and glitter paints. On Friday and Saturday, PPG gave a presentation on its products. Throughout the event, Traeger Grills was also on hand to connect with the Soda Springs grilling community.

Throughout the three-day festivities, Caribou Jack’s also hosted a raffle for a Grizzly cooler set, a Traeger grill and a helicopter ride with Idaho Air Rescue, which Lau says helped take the Caribou Jack’s BBQ grand opening to new heights.

Lau says the Caribou Jack’s BBQ menu has something to please every customer. Diners can choose from smoked turkey, chicken, pork and brisket served as a sandwich with a salad or atop a baked potato with a salad. For sides, Caribou Jack’s BBQ serves up three kinds of beans, two versions of potato salad, coleslaw and “Jacked Mac,” the restaurant’s take on macaroni and cheese which includes plenty of pepper jack flavor.

Caribou Jack’s BBQ uses locally sourced ingredients whenever possible, Lau says. They’re currently getting their meat supply from a local butcher in nearby Pocatello, Idaho. In the coming months, Lau and his team hope to build a commercial greenhouse to supplement its supply of locally grown vegetables.

Lau says that after Memorial Day, his may introduce new menu items, including a daily special and possibly pizza. One daily special might even be inspired by a stroke of luck that occurred during the grand opening of Caribou Jack’s BBQ.

“My wife brought a pineapple from home and said she wanted to smoke it. I thought we were busy enough with the grand opening to try a new recipe, but it turned out fantastic,” Lau says.  “I want to do a daily pulled pork sandwich with smoked pineapple and a Hawaiian sauce we really like. The daily special will be things we normally serve, but just adding a little flair to them to mix it up for our customers.”

Lau says that the past few months have been “pretty crazy” as the store reset its Century Tools product lines and updated to PPG Porter Paints. The team also expanded its outdoor living department by adding more camping and fishing products, all while working hard to ensure Caribou Jack’s BBQ would be ready to serve customers when warm weather arrived.

“Two months ago, I still didn’t have the hood up or the plumbing done. It took about five months to get through all the plumbing work,” Lau says. “Plumbing was a challenge for a lot of reasons, but we finally got everything in order before we opened.”

After passing the health inspection, ensuring the restaurant’s plumbing was all set and adding the final touches, Lau says Caribou Jack’s BBQ was ready for its big debut. 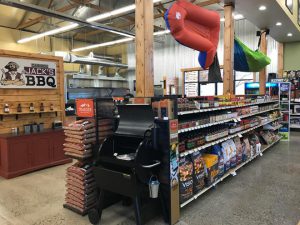 “Independent retailers have so many challenges these days,” he says. “A lot of times, capital is the biggest problem. It’s not that we don’t know what we want to do or don’t know what customers need, the challenge is having the capital necessary to make those investments. Reimagine Retail changes all that. It’s a great way to get capital for your business.”

After seeing the first Reimagine Retail winner’s business improvement plans become a reality, Russo hopes other independent retailers will be inspired to consider new possibilities for their own businesses.

“When I visited Robert at the grand opening of the Caribou Jack’s BBQ, I was able to see firsthand what a program like this can do for a small business, a family and a community,” Russo says. “I saw the excitement and buzz that this addition made to his store and what it means for the future of Caribou Jack’s. I hope that people will take away that we can all learn from each other by sharing ideas, visions and goals that we wish to accomplish and by seeing what our peers are trying to accomplish that may just spark an idea for each one of us.”

Todd is trends editor for Hardware Retailing magazine. He graduated from Indiana University where he majored in journalism and French. Throughout his career, he has aimed to highlight small businesses and their community value. He joined NRHA in 2017.
Previous Walmart Labs and Home Depot Invest in Technology Workers
Next Milwaukee Family Business Keeps the Past Alive With Museum Exhibit