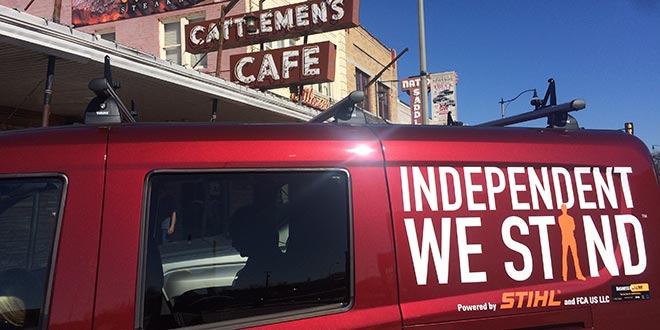 Last summer, I road tripped with Independent We Stand to visit local retailers along a route from Detroit to Boston, helping celebrate and spread awareness of small businesses of all kinds, including hardware and home improvement stores.

This week, I headed out again with three representatives from Independent We Stand, an organization that encourages shopping local. I reunited with Bill Brunelle, co-founder of Independent We Stand, Tara Mazallera, community manager for the organization, and videographer Scott Sonneberg for what we’re calling The Great American Route 66 Road Trip.

On March 13, I arrived in Oklahoma City, excited for the first stop of the trip, which was scheduled for the following day.

We stayed at the Colcord Hotel in downtown Oklahoma City, which is listed as one of the Historic Hotels of America. The building was constructed in 1910 and details in its architecture you don’t find too often today. The original marble still is featured in the columns and walls of the main lobby.

Monday morning, we hit the road around 8 a.m. to start our day. Our first visit was to Richards Car Care Tire Pros, and then we headed to Bob Moore Chrysler Dodge Jeep Ram to speak with the local owners and hear about their involvement in their community.

Around noon, we headed to an area in Oklahoma City called the Stockyards, which is a public livestock market that opened in 1910 and today is the world’s largest stocker and feeder cattle market.

We ate lunch at the Cattlemen’s Steakhouse, where we enjoyed chatting with Pam Shelton, executive director of Stockyards City Main Street. Shelton talked about unique events Stockyards City hosts, such as Wines of the West, which features several wineries from all over Oklahoma, and the Stockyards Stampede, which happens in October. For the stamped, cattle run down the street, attracting an audience of locals and tourists, too.

Next, we headed to Central Power Equipment and then ended the day with a visit at Spectrum Paint.

The business owners we met were excited about our mission to support local businesses and encourage community members to shop at their stores rather than at big boxes.

We haven’t had the chance to visit any hardware or home improvement retailers just yet, but we will soon.

Renee Changnon is the retail outreach coordinator for NRHA. She meets with retailers in their stores and at industry events and introduces them to the services NRHA provides. Renee previously worked as a member of the NRHA communications team. She earned a degree in visual journalism from Illinois State University, where she served as the features editor for the school newspaper. After college, she implemented marketing and promotions initiatives at Jimmy John’s franchise locations across the country. She enjoys exploring books with her book club, Netflix marathons and hosting goat yoga at her apartment complex. Renee Changnon 317-275-9442 rchangnon@nrha.org
Previous A 2016 Outlook on Home Improvement Product Sales
Next Route 66 With Renee: A Warm Welcome in Amarillo