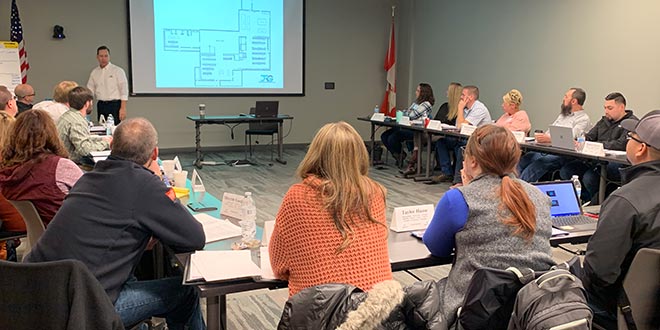 “We wanted to revamp some of our marketing approach, specifically with social media, and then we had this video go viral,” Cloninger says.

The Rust-Oleum Glitter Paint video that Cloninger posted to his store’s Facebook page has accumulated over 1.8 million views to date, and he says they still get messages from all over the world asking about it.

Cloninger credits RMCP with helping him create a marketing plan that capitalized on the store’s viral fame and resulted in increased sales and market penetration.

“We were able to look at the analytics that I didn’t know to look at prior to the program,” he says. “I was able to take what was happening in real time in my business to the staff and say, ‘Help me figure this out,’ and learn why it was happening. It was really cool.”

From there, Cloninger developed a marketing campaign that included billboards and other forms of advertising.

“Instead of being so reactionary, I wanted to be more forward-thinking. That’s one of the things they teach in the course,” Cloninger says.

Although the program includes homework and requires in-person visits to Indianapolis that took him away from the store, Cloninger says he didn’t mind the time commitment.

“I was doing my business work, not schoolwork,” he says. “It’s definitely a worthwhile program, and I found value in it despite being in the business for a while,” Cloninger says. “I think the biggest benefit is the value it brings directly to your business.”

Cloninger’s story is a typical example of the interactive training students can expect from the program, according to Scott Wright, executive director of the Retail Leadership Institute.

“RMCP is designed for students to apply what they learn in the classroom to their business to help drive sales and profits,” Wright says. “It’s the only program of its kind in our industry.”

Take the Next Steps to Save Big

To learn more about RMCP, visit nrha.org/rmcp or contact Scott Wright at 317-275-9417 and swright@nrha.org for more information. Ready to apply? You can save 20 percent off program tuition when you apply before Jan. 1. Take the first step to a rewarding, long-lasting career in home improvement today.

Julie Leinwand is the Corporate Communications Manager and Editor for NHPA. She graduated from the Missouri School of Journalism. In her spare time, she enjoys baking fanciful desserts and spending time with her puppies and husband.
Previous Soil Probiotic
Next 2019 State of Independents Conference Focuses on Future of Industry