Home » Industry News » Retailer Elected to NRHA Board of Directors 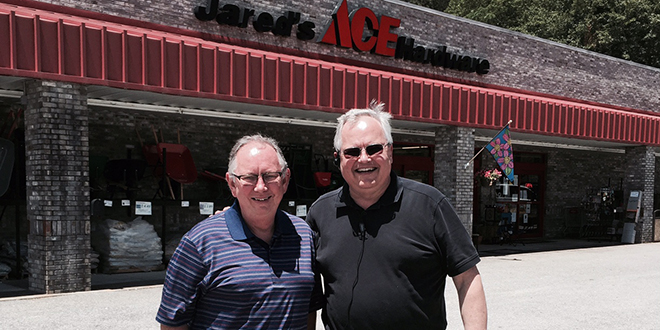 Retailer Elected to NRHA Board of Directors

Jared (Jake) Smith, owner of Jared’s Ace Hardware and Crossroads Outdoors in Bishopville, South Carolina, was elected to the North American Retail Hardware Association’s (NRHA) board of directors at the organization’s May Annual Meeting in Las Vegas.

After growing up working for his father in the family hardware store, Smith spent several years after college working as a sales office clerk and then as a traveling sales representative for various hardware operations in the southeast before returning to work full-time at the family store in 1981. Since then, Smith has grown the business from a two-employee operation to a 16,000-square-foot hardware, home and garden center with 18 employees. When the local economy went through troubling times recently, Smith kept a steady hand at the helm of his business as he continued to invest money in his store and avoid layoffs. Earlier this year, he and his team opened Crossroads Outdoors, a hybrid outdoor sports, clothing and hardware retail store, in downtown Bishopville.

Jared’s Ace Hardware and Crossroads Outdoors are strong supporters of the community. Smith has been involved in numerous local boards. He has served as board chairman for Lee Academy, vice president for the Lee County South Carolina Chamber of Commerce and trustee chairman of the Bethlehem United Methodist Church. He currently serves on the board of directors of the Regional Education Center for the Santee Lynches Council of Governments. Smith and his wife, Marie, have two sons: Bryan of Greenville, South Carolina, and Paul of Bishopville, South Carolina.

Now, Smith will join a board comprised of retailers from across the U.S. and Canada. The NRHA board of directors’ officers include: chairman Adam Busscher of Picton, Ontario, Canada; executive vice chairman James Cabirac of Cut Off, Louisiana; first vice chairman Megan Menzer of Cherryvale, Kansas; second vice chairman Taylor (TJ) Comstock of Billings, Montana; and third vice chairman Greg Schlecht of Mukwonago, Wisconsin. Gary Copeland of Rising Sun, Indiana, is immediate past chairman. In addition to the officers and Smith, NRHA directors include Daniel Harris of Palos Heights, Illinois; Tim Buchheit of Perryville, Missouri; and William E. Aubuchon, IV of Westminster, Massachusetts.

Jesse Carleton has visited independent hardware retailers, conducted original research on the industry and written extensively about the business of hardware retailing. Jesse has written for more than a dozen of NHPA’s contract publishing titles, all related to the hardware retailing industry. He also was instrumental in developing the Basic Training in Hardware Retailing courses now used by thousands of retailers across the country.
Previous Lowe’s Canada to Give Loyal Customers Wings
Next NRHA Grant Inspires a Fresh Look at Independents