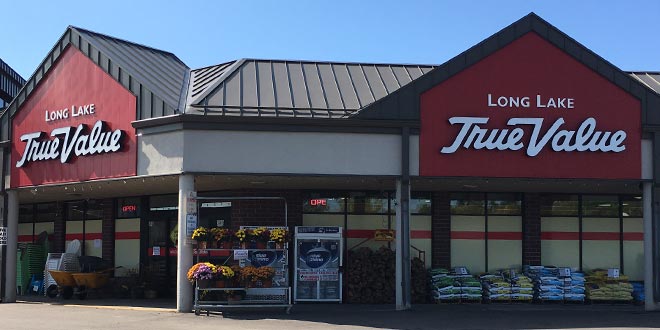 When a local police officer died on duty, Mike Kokesh, a fellow police officer and co-owner of Long Lake True Value in Long Lake, Minnesota, and his co-owner Mark Schaefer, a local firefighter, wanted to honor their fallen friend.

On Friday, Sept. 8, police officer Bill Mathews was struck by a car on U.S. Highway 12 as he was clearing debris off the road. Mathews died later that day, and Kokesh says he wanted to support Mathews and his family in any way he could. What began as a small gesture turned into a communitywide movement.

“That Friday evening, I called the store and told them to pull all the blue lightbulbs we had and put them near the register,” Kokesh says. “It’s a tradition to turn on a blue porch light in honor of a fallen officer.”

Both Kokesh and Schaefer wanted to light up the community in blue, so the decision was made to give the bulbs away for free. Because they only had a few blue lightbulbs in stock, Schaefer drove to a local big-box chain and purchased 100 blue lightbulbs. Meanwhile, Kokesh placed a late night call to his retail consultant.

“Our retail consultant made phone calls for us and actually was able to get the distribution center warehouse open on a Saturday morning, taking out all 486 blue lightbulbs from the warehouse.”

To let fellow community members know blue lightbulbs were available at the store, Kokesh made a public post on the store’s Facebook page and he says the response was more than he could have imagined, ultimately reaching over 41,000 people.

The next day, he went to the store and was greeted by four TV. Through this growing publicity, Kokesh says the store continued to buy bulbs from various retailers as they ran out and continued giving them away for free. Customers felt funny not paying for them, so Kokesh created a donation bucket where people could contribute donations for the Mathews family.

“The next morning, not even 24 hours later, I got a phone call from the family,” Kokesh says. “They were amazed by what was being done.”

The store gave away about 700 blue lightbulbs. “We made sure that all 72 homes in the family’s neighborhood had blue lights, and at night now, our entire community is lit up by the blue front porch lights,” Kokesh says. “As a police officer myself, being on duty and seeing all the blue lights is reassuring, knowing that your community supports you and appreciates you putting your life on the line.”

According to Kokesh, what makes independent businesses so unique is the ability to really be a part of the community, in good and bad times.

“No matter what co-op or distributor a retailer is with, we’re all an important part of the communities we’re in,” Kokesh says. “We have an opportunity and frankly, an obligation to support the community. Sponsor a baseball team, donate to a pancake breakfast, participate in a parade or help during a tragedy, like what happened in our community.

“If you support your community, the community will support you,” Kokesh says. “Anyone can have a big sale, but you won’t see the level of community support at the big-box level that you can from independent retailers. That’s priceless.”

Renee Changnon is the retail outreach coordinator for NRHA. She meets with retailers in their stores and at industry events and introduces them to the services NRHA provides. Renee previously worked as a member of the NRHA communications team. She earned a degree in visual journalism from Illinois State University, where she served as the features editor for the school newspaper. After college, she implemented marketing and promotions initiatives at Jimmy John’s franchise locations across the country. She enjoys exploring books with her book club, Netflix marathons and hosting goat yoga at her apartment complex. Renee Changnon 317-275-9442 rchangnon@nrha.org
Previous Rechargeable Flashlight
Next You Won’t Be Competing With Walmart for Holiday Hires