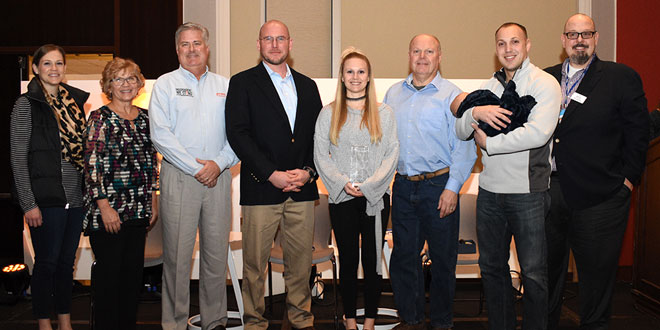 When Samantha Post of T&M Hardware took the stage to accept an award Dec. 6, she wasn’t just representing her family’s business. She was asking a crowd of retailers to look beyond their own operations to support small business in every way they can.

The organizations created the award to honor a home improvement retailer who makes exceptional efforts to promote the shop local movement in their community.

They selected Post as their first-ever Spirit of Independents Award honoree because of her work with the Bellevue Initiative for Growth and Revitalization, a nonprofit community development organization, and her tireless efforts to refer and attract customers to other independent businesses in her area.

Dan Tratensek, executive vice president of NRHA, and Bill Brunelle, co-founder of Independent We Stand, presented the award Dec. 6 at the NRHA 2018 State of Independents Conference in Chicago.

Post’s family owns and operates six T&M Hardware stores in Ohio and Pennsylvania. Post directly manages one store location, among other roles within the company.

Kate is profiles editor for Hardware Retailing magazine. She reports on news and industry events and writes about retailers' unique contributions to the independent home improvement sector. She graduated from Cedarville University in her home state of Ohio, where she earned a bachelor's degree in English and minored in creative writing. She loves being an aunt, teaching writing to kids, running, reading, farm living and, as Walt Whitman says, traveling the open road, “healthy, free, the world before me.”
Previous Start Your Year With a Solid ROI
Next Indian Trail Hardware Thrives With Direction From Mother-Daughter Team