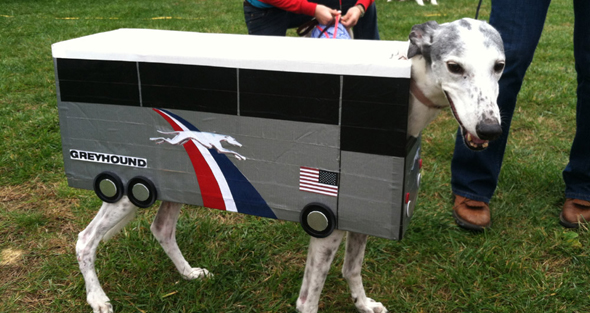 Employees at Klem’s know dogs are more than just pets. They’re allowed in the store year-round and customers treat them as part of the family.

“We know how much our customers love their dogs,” Klem’s president Jessica Bettencourt says.

So every year, the Saturday before Halloween, the dogs take center stage at the store in Spencer, Mass., as the staff hosts a dog costume contest that brings in as many as 125 dogs.

This year will be the eighth for the contest, which was open to all pets the first year it was held. “It got a little interesting with all the different pets, including even a miniature horse,” Bettencourt says. “We decided the following year that it would be safer to limit it to dogs.”

The costume contest is held outside, in a field next to the store, which offers a little more space. Dogs also get to go trick-or-treating inside the store, where an employee in each department offers a different type of dog treat. “Some are treats we sell, while others are samples we receive from vendors,” Bettencourt says.

A local DJ broadcasts from the event and is part of the judging committee, along with several store employees. “The DJ told me she loves coming to the event,” Bettencourt says, “but she says that while it’s so much fun, it’s incredibly hard to judge.”

There’s definitely some stiff competition. “We’ve had everything from Great Danes dressed up as dragons with 3-foot tails to dogs dressed as beer cans,” she says. “The owners didn’t just get up that morning and think of a costume. Some are made of papier-mâché—they worked on them for weeks.”

A crowd gathers to watch as prizes go to the funniest, most original and scariest costumes.

“Even people who don’t have dogs come to watch,” says Bettencourt. “It’s fun. We do a lot of events, and this is one of our most popular.”

Sales are usually up at the store that day as well. “It’s probably not one of our biggest days, as customers are there with their dogs in elaborate costumes and don’t have the ability to do a lot of browsing, but it’s a good way to meet with members of the community. We figure they’ll come back to buy something they saw.”

Bettencourt suggests other retailers who want to try a similar event make sure they have adequate space at their stores. “We moved it outside after the first year,” she says. “Be prepared for the event to pull in more people than you think. I think that’s what surprised us the most—how quickly it grew and how many people came to the event.

“A few years ago, there was a blizzard forecast for the day of the event. We still had 70 dogs show up. We gave our trophies with snow flurries falling.”

Besides being a good way to promote their pet department, the contest allows the staff at Klem’s to interact with the community and to include pets, which are very special to their customers.

“To our customers,” Bettencourt says, “their dogs are part of the family.”

Liz is the special projects editor for Hardware Retailing magazine. She reports on news and trends, visits retailers, and attends industry events. She graduated from Xavier University, where she earned a degree in English and Spanish and was a member of the swim team. Liz is a Louisville, Kentucky, native who lives in Indianapolis with her husband and two children. She enjoys swimming, reading, doing home improvement projects around her house and cheering on her two favorite basketball teams, the Kentucky Wildcats and the Xavier Musketeers.
Previous RETAIL THERAPY: Added Up, You Can Compete
Next INDEPENDENT THINKING: Association Health Insurance for You and Your Families