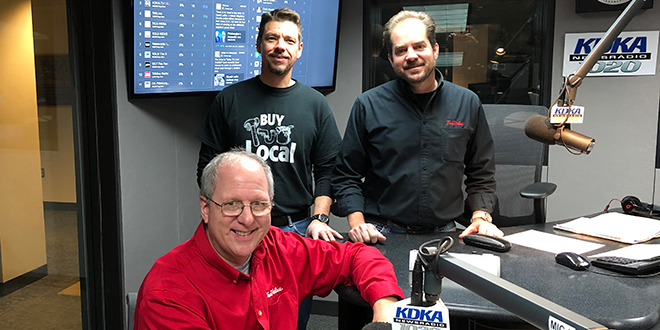 Not every retailer gets an audience of a few million consumers at once. But that’s just a regular Saturday morning for Andy Amrhein, owner of Evey True Value Hardware in Bethel Park, Pennsylvania. For more than 25 years, every Saturday morning from 10 to 11, Amrhein sidles up to the microphone in the KDKA studio in Pittsburgh to help callers of his radio show with their home improvement questions.

The True Value Home Improvement Hour radio show is a mixture of conversation about seasonal home improvement projects, discussions of new products and answers to questions for those who call in. According to KDKA, the show can have as many as 4 million radio listeners on any given Saturday, in 22 states across the east coast and Midwest, making it one of the station’s most listened-to shows. Recently, Amrhein started streaming the show on his store’s Facebook page and posting podcasts of the show, which has brought in thousands more listeners and allowed him to reach anyone in the world.

“We’ve been on the same radio station for more than 20 years, which is unusual for a call-in show,” says Amrhein. “That has given us a huge amount of credibility as being the experts in the industry.”

What do the three retailers do with that fame? The show drives a lot of business to their stores, says Amrhein.

But with such a broad reach, he has a much larger purpose. “The bottom line here is that we are promoting independent hardware stores to a radio and online audience and telling consumers about the expert service and advice they can get from the independent retailer,” he says. “This has been a great way to promote the strength of the True Value name, which helps stores all across our listening area.”

Jesse Carleton has visited independent hardware retailers, conducted original research on the industry and written extensively about the business of hardware retailing. Jesse has written for more than a dozen of NHPA’s contract publishing titles, all related to the hardware retailing industry. He also was instrumental in developing the Basic Training in Hardware Retailing courses now used by thousands of retailers across the country.
Previous Electrical Cord Protection
Next Home Depot Cuts Its Installation Staff