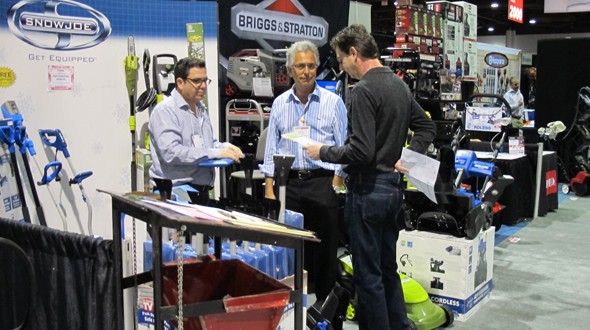 Feedback regarding changes occurring within the True Value co-op over the past year appeared notably positive from retailers exploring True Value’s Spring & Rental Reunion this past weekend in Atlanta.

While still concerned about national economic conditions and cautious about the delivery and speed of that change, retailers told the editors of Hardware Retailing they are excited about new goals introduced at the co-op’s last Reunion, including a new branding initiative, and the objectives of the co-op’s President and CEO John Hartmann and his new senior leadership team moving forward.

“We actually haven’t been to a show in a while, but we really wanted to see all the things that are changing,” says Chip Broome, owner of Winnsboro Building Materials, an 8,000-square-foot building materials store in Winnsboro, S.C. “We’re really excited to explore some of the new areas that will allow us to branch out.”

The excitement was solidified by an announcement of a new national partnership True Value Foundation has forged with the Boys & Girls Clubs of America.

“Our partnership with Boys & Girls Clubs of America is a natural fit. The local nature of the Boys & Girls Clubs mirrors independent retailers’ community efforts locally. It is our objective to help more retailers unite around a common philanthropy,” says Brent Burger, True Value Company board of directors chairman, True Value Foundation president and owner of five Maine-based True Value stores, located in Farmingdale, Madison, Winslow and Skowhegan, and a Just Ask Rental store in Skowhegan.

Other announcements included a wrap-up of the co-op’s 2013 financials, including $1.9 billion in gross billings, comparable-store retail sales that grew by 2.1 percent and a patronage dividend to shareholders totaled $54.3 million.

Technological Advancement, In And Out

Additionally, True Value focused on updating retailers on technological advancements the co-op is making to improve both internal operations and retailer capabilities. In addition to announcing enhancements to its mobile Special Order App that provides real-time data from all True Value warehouses, ordering capabilities, purchase order manipulation and historical order lookup, the organization held discussions where retailers could provide feedback and suggestions about ways to improve the app.

“Within the meeting, we take a vote on certain aspects of the app so retailers can get a sense of what their peers are thinking,” says Rosalee Hermens, vice president, chief information officer at True Value Company. “Suggestions included having the app display companion products for add-on sales and accessories and replacement part look-ups.”

Hartmann concluded the General Session with an update on the progress of the co-op’s strategic planning process, which it will present in full to its board in the summer and announce at its Fall Reunion in October.

“We have an inspiring set of retailers within the True Value family,” says Hartmann. “With some of the new goals and objectives to support those retail efforts, we not only have the ability to grow and become stronger as a co-op, but to collectively strengthen each individual store.”

Amanda Bell was an assistant editor of Hardware Retailing and NRHA. Amanda regularly visited with home improvement retailers across the country and attended industry events and seminars. She earned a degree in magazine journalism from Ball State University and has received honors for her work for Hardware Retailing from the Association of Marketing and Communication Professionals.
Previous Boost New Customer Traffic In-Store and Online
Next Home Depot’s Comp-Store Sales Up in Fourth Quarter