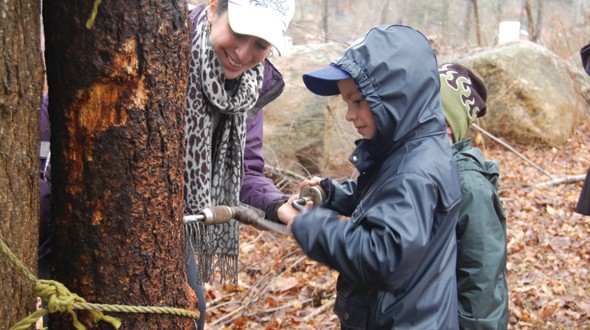 Two retailers recently teamed up with nearby nature centers to help some of their youngest customers tap into a local hobby: maple sugaring.

Staff at Keough’s Do it Best Paint & Hardware in Connecticut and Orme Do it Best Hardware in Ohio worked with Tap My Trees, a company that teaches how to tap trees for maple sugaring and sells sugaring supplies. Together, they provided the necessary supplies to children attending maple sugaring programs at the Stamford Museum & Nature Center in Connecticut and Dawes Arboretum in Ohio.

“The museum is a customer of ours, and they do a tree-tapping program with elementary students in the Stamford community,” Ray Barrett, Keough’s general manager, says. “I think it’s a great thing they do, and I wanted to see if Keough’s could get more involved.”

Barrett gave each of the children attending the museum’s sugaring program a bag with a spile (a tap) and a coupon for 10 percent off any of the store’s sugaring supplies.

“The arboretum has always been very involved in the community, especially with the youth,” he says. “They’ve run a maple sugaring class for several years, and we wanted to get involved.”

Both Keough’s and Orme stock maple sugaring supplies for their d-i-y customers who want to try a new hobby. The sugaring season usually runs from the end of January to mid-March.

“We carry a 4-foot section with the taps, buckets, thermometers and more—pretty much anything a customer would need to start maple sugaring,” Barrett says. “It brings customers into our store, and handing out all those coupons helped, too.”

McCoy has endcaps in his stores with all the supplies a maple sugaring hobbyist needs. “It’s a great little niche,” he says. “It’s highly seasonal. It brings more traffic to the store and keeps people in the store a little longer.”

Liz is the special projects editor for Hardware Retailing magazine. She reports on news and trends, visits retailers, and attends industry events. She graduated from Xavier University, where she earned a degree in English and Spanish and was a member of the swim team. Liz is a Louisville, Kentucky, native who lives in Indianapolis with her husband and two children. She enjoys swimming, reading, doing home improvement projects around her house and cheering on her two favorite basketball teams, the Kentucky Wildcats and the Xavier Musketeers.
Previous Small Businesses Anticipate Breakout Year Ahead
Next Let Customers Try It Before They Buy It