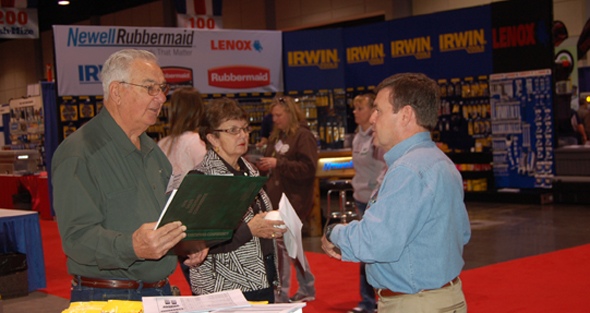 At its biannual buying market, Atchison-Kan.-based distributor Blish-Mize rolled out new ways to streamline the purchasing process for retailers, many of whom reported increased buying due to the improving housing market nationwide.

To assist its customers to stay on top of heightened purchasing demand, Blish-Mize developed a specialized report called the SmartBook, showing each of its customers’ 2013 Blish-Mize purchases. “This book has helped customers pre-plan for our buying market and purchase accordingly. Plus in conjunction with annual reports presented to customers earlier in the year by our sales teams, customers are coming to our market better prepared and looking for new ideas to improve their stores,” said CEO and President Jonathan Mize.

“Customers are also looking forward to a strong spring and summer selling season and are ready for the tough winter to be over.”

Manufacturers on the show floor said they noticed retailers’ increased purchasing habits. Despite a slower start to the year, Darrin Purcell, president and CEO of Century Drill & Tool, said many retailers were talking about buying more in preparation for the spring selling season. “Sales have been good for us at this market. We’ve found many retailers who are ready to buy and that Made in America products continue to be a big trend,” he says.

A Focus on Farming

Keeping up with the Made in America product trend and increased demand for farm products from its customers, Blish-Mize also announced a partnership with Ranchmate, a line of wire fence construction and repair products developed in the U.S. that has an official licensing agreement with the Future Farmers of America.

“Many of our customers are in rural communities. This partnership with Ranchmate helps them strengthen their ties with the farm and ranch customers in their communities,” Mize said.

Overall, retailers on the market floor were optimistic for future growth. Kathy and Jack Ables of Lebo Lumber in Lebo, Kan., for example, reported sales were up in their market because of the improving housing market.

“Our store sells to a lot of farmers and contractors who are bidding on more new projects. We anticipate sales to pick up more now that spring is here and they can complete those projects in warmer weather,” Jack said.

Dale Chaney of Economy Lumber & Hardware in Warrensburg, Mo., said he noticed a similar trend in his market. “We sell to a lot of property managers of apartments and rental properties, so we’ve seen the positive effects of the housing recovery in our overall numbers,” he said.

Amanda Bell was an assistant editor of Hardware Retailing and NRHA. Amanda regularly visited with home improvement retailers across the country and attended industry events and seminars. She earned a degree in magazine journalism from Ball State University and has received honors for her work for Hardware Retailing from the Association of Marketing and Communication Professionals.
Previous Spruce Up Spring Project Sales
Next Window and Door Flashing Tape