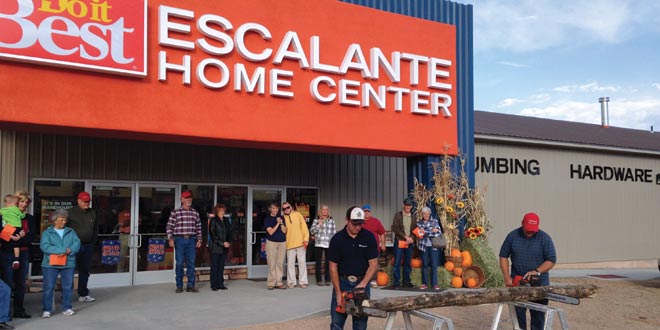 Want to make a statement the day your store opens? Try finding a way to make your ribbon-cutting ceremony unique.

That’s what Greg Pace, owner of Escalante Do it Best Home Center in Escalante, Utah, did when his store opened in October 2013.

“We broke ground in early June of that year and had our grand opening in early October, so we really moved the project forward quickly,” Pace says. “When it came time for the ribbon cutting, we wanted to do something unique. We didn’t have big scissors, but we did have a chainsaw.”

They also had a 21-foot pole, so they used the pole and the chainsaw—both items sold at the store—for a unique ribbon cutting ceremony.

Pace says there were positive comments from customers about the ceremony—customers who were excited for the store to open.

“We actually had a few residents come in and help us merchandise the store as we were getting everything set up,” he says. “They wanted to see it open sooner.”

If you’re planning to open another location or even hold a grand reopening after a store reset, see if you can find a similar way to add a creative spin on your grand opening ceremony.

Lynnea is the senior graphic designer for Hardware Retailing magazine, where she works on the layout and design of the magazine and other custom publications. She also does print design for NRHA’s marketing materials, programs and other in-house projects. Lynnea graduated from Ball State University with a degree in Graphic Design. She lives in her hometown of Greenwood, Indiana. During her free time, she enjoys designing, painting, reading and volunteering at her family-owned childcare facility.
Previous 5-in-1 Multi-Tool
Next Nominate Favorite Independents for Indie Award