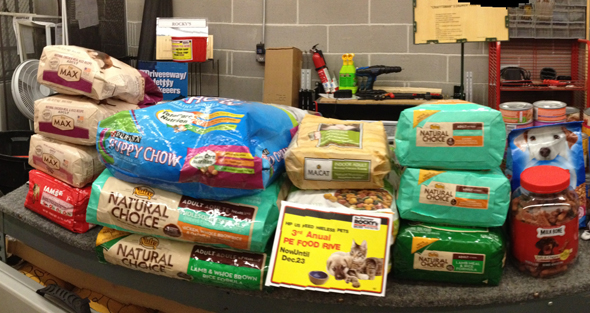 Each Rocky’s Ace Hardware location partnered with an area humane society or shelter to collect and deliver food and supplies for animals in need. The program, which kicked-off Nov. 22 and ended Dec. 24, supported thirty organizations that provide shelter, veterinary care and comfort for homeless animals in five states.

“The outpouring from our customers was, just in previous years, truly heartwarming. Every year I am taken back by the level of support this drives receives. All of us at Rocky’s extend sincere thanks to our neighbors who gave so generously,” says Rocco Falcone, president and CEO.

Food donations increased more than two thousand pounds from the year before, with 6,556 pounds collected in 2012, and were given a boost by Nutro Pet Foods, which donated of $1,500 worth of premium dog and cat food. Donations of other pet supplies also were unprecedented.

“This annual drive gets bigger and better every year, this year’s total was absolutely staggering,” says Geoffrey Webb, director of marketing and advertising. “Besides the enormous increase in food donations, we were also able to pass along much needed cleaning supplies, feeders, pet crates, leashes and other items as designated by the shelters on their wish lists.”

“The campaign has become an annual tradition here at Rocky’s” Falcone adds. “Our team members often make their own donations and many volunteer at neighborhood shelters. All encourage our customers to support the drive. We are honored to be a catalyst in achieving these outstanding results for the homeless and abandoned animals in our communities.”

Amanda Bell was an assistant editor of Hardware Retailing and NRHA. Amanda regularly visited with home improvement retailers across the country and attended industry events and seminars. She earned a degree in magazine journalism from Ball State University and has received honors for her work for Hardware Retailing from the Association of Marketing and Communication Professionals.
Previous New Website Rolled Out at United Hardware Buying Market
Next Grow Wild Bird Seed Sales with Attractive Displays