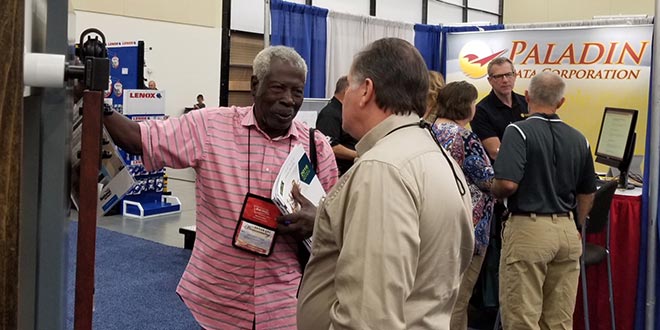 Sales are growing at House-Hasson Hardware dealer markets and so are the vendor displays.

Figures for House-Hasson’s October 2017 dealer market in Sevierville, Tennessee, saw a 13 percent sales increase over 2016, which was up 14 percent over 2015. In addition, the number of vendors increased by 10 percent at the 2017 event.

“A growing number of vendors are bringing their National Hardware Show® booths to our markets, so we’re seeing some bigger displays,” Don Hasson, president of House-Hasson Hardware, says. “They know it’s an important show.”

“It makes a statement when vendors go to the effort and expense of bringing the display they use at the annual National Hardware Show in Las Vegas to our market,” Hasson says.

The company attributes increases in Amish customers to the attendance growth in those areas.

House-Hasson noticed its retailers buying for year-round needs instead of with seasonal focuses.

“Rather than coming just to buy lawn and garden, wintertime products or another seasonal need, dealers are using markets in terms of buying for year-round profitability,” Hasson says. “That’s the advantage of growing attendance in dealers and vendors. Each brings benefits to the other.”

The next House-Hasson dealer market is scheduled for Feb. 1-3, 2018, at the Opryland Hotel in Nashville, Tennessee.

“We hold our markets in locations where dealers and their families can enjoy themselves,” Jason Monroe, House-Hasson merchandising vice president, says. “Combining market deals that improve profitability with the ability to enjoy themselves in a vacation destination, dealers are taking advantage of both.”

Melanie is the communications and content manager for the North American Hardware and Paint Association. She joined the NHPA team in 2016 as an editor for Hardware Retailing and now helps lead the communications team to deliver relevant, timely content to the industry.
Previous Retailers Take the Stage at NRHA State of Independents Conference
Next Arizona Sisters Put Family in Family Business