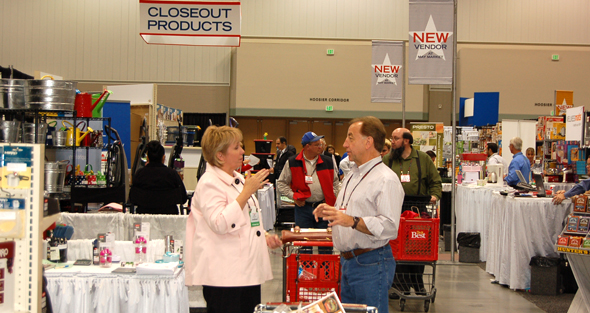 Signs of Improving Economy Evident at Do it Best October Market

From the return of an old friend to the introduction of a new program, the Do it Best Corp. October Market, held Oct. 19-21 in Indianapolis, had plenty to offer its retailers.

During the shareholders’ meeting Sunday night, Don Wolf, former CEO of Hardware Wholesale (which later became Do it Best), who retired as president in 1992, found himself back among the co-op’s employees and members, when Indiana Gov. Mike Pence presented him with the Sachem Award, the highest honor the governor awards.

The co-op also introduced a new program for its retailers: Do it Dollars.

At the end of each fiscal year, each retailer’s Do it Best warehouse purchases for that year will be recorded. If their total purchases increase the following fiscal year, they’ll be given 3 percent of the increase in Do it Dollars—money that retailers can put toward Market attendance, store redesigns, apparel for their employees or a number of other programs designed to grow their businesses.

“Do it Dollars are a win-win for both retailers and their customers,” says Randy Rusk, Do it Best’s director of communications. “They can put that money toward their stores, and their customers will benefit from better shopping experiences. Retailers then buy more out of warehouse, which in return provides them with more Do it Dollars the following year.”

Rusk says Do it Best members’ purchasing patterns show the economy is improving. “Some retailers may have been tight on their inventory in the past few years,” he says, “but now, as things pick up they’re feeling better, and they’re exploring new categories, new options.”

For example, David Nagy of Chalfont Hardware was shopping for extra inventory after a recent store reset. “We typically like to see what’s new and what’s going on with new products. I’ve found a lot of good stuff at the market.”

Vendors were also positive, noting high numbers of sales early on during the first day of the Market.

One category that’s attracting more attention, Rusk says, is home decor. “There are so many new products, and all the new innovations make it easier for DIYers to install products in our homes that are cost-effective and very attractive,” Rusk says.

The new lighting regulations were also a popular topic at the Market. Do it Best is giving its members a small display that they can put in their stores to help customers understand watts versus lumens, what types of bulbs are available at each number of lumens and how long each type of bulb should last.

“Light bulbs have almost become a niche,” Rusk says. “There are so many types and colors available. We want our retailers to have the resources they need to tell their customers about what’s changing and how to choose what type of bulb to buy. It’s all about positioning the retailer as a resource.”

And, as always, new products were popular among retailers at the Market.

Autumn Thomas of Thomas Do it Center was on the lookout for any number of new items for her store.

“That’s something we’re always looking for,” she says. “We like to see what’s new out there.

“Everything’s going really well here at the Market,” she says. “We’re restocking and getting ready for spring.”

Members received $116.4 million in rebates, an increase from last year, and the 10th year in a row Do it Best Corp. has exceeded the $100 million mark for rebates.

“We call it our ‘decade of dominance,’” Rusk says. “It’s an amazing record.”

In addition, five members were given rebates of more than $1 million each.

Sales at the co-op’s annual Sneak Peek on Friday night­—an event that offers attendees extreme discounts—were at a record high as well, with $8.8 million worth of sales made in 90 minutes.

Do it Best continues to see growth as it works on construction for its newest retail service center (RSC) in Sikeston, Mo., which is expected to open in January. Jerry Pullen, mayor of Sikeston, presented President and CEO Bob Taylor with a key to the city just before Friday’s Sneak Peek. The new RSC will be more than 550,000 square feet and will replace the current RSC in nearby Cape Girardeau, Mo.

Amanda Bell was an assistant editor of Hardware Retailing and NRHA. Amanda regularly visited with home improvement retailers across the country and attended industry events and seminars. She earned a degree in magazine journalism from Ball State University and has received honors for her work for Hardware Retailing from the Association of Marketing and Communication Professionals.
Previous Laying the Foundation for a Succession Plan
Next Make the Most of Staff Meetings