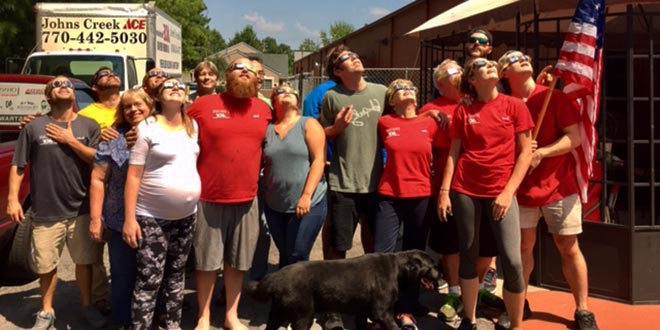 On Monday, Aug. 21, people across the United States took a break from their daily routines to look up at the sky. In more than 14 states, locals and out-of-towners gathered to witness the total solar eclipse that passed from the Pacific to Atlantic coasts, and many independent retailers helped them celebrate the experience.

Even those not in the path of full totality were able to see at least a partial eclipse, which made this a memorable event for the entire country.

A solar eclipse occurs when the moon passes between the earth and the sun, which can totally or partially obscures the image of the sun for a viewer on earth. This video from NASA explains in further detail the 2017 total solar eclipse.

Hardware Retailing reached out to retailers who helped their communities make the solar eclipse an event to remember.

Before the locals in Alpharetta, Georgia, even started thinking about the solar eclipse, Richard Lukowiak, general manager of Johns Creek Ace Hardware, made the decision to order 50 pairs of eclipse glasses, which viewers needed to wear in order to safely watch the eclipse.

“I pitched the idea of selling solar eclipse glasses to my father, who owns the business, a few weeks before the eclipse,” Lukowiak says. “He let me order them, but didn’t want me to order any more because it just seemed too risky of an item.”

However, his risk paid off. Three weeks before the eclipse, Johns Creek Ace Hardware had its solar glasses available at the register, and people were buying them. When online retailer Amazon announced the eclipse glasses they sold were not verified as being safe, Lukowiak says demand from customers was huge.

“After Amazon made that announcement, and with no other stores in town really selling the eclipse glasses, people came rushing to us,” Lukowiak says. “I kept my dad in the loop and would tell him we needed to purchase more, and he was always reluctant, but would say yes.”

Lukowiak says every time a shipment would come in, the glasses would sell out, so he continued placing new orders. The last day before the eclipse, they special-ordered 4,000 eclipse glasses. They also allowed customers to preorder the glasses.

“For five days straight, we couldn’t make a call out of our store because people were calling so often to ask if we had them, and we have four phone lines,” Lukowiak says. “In total, we sold 10,000 pairs of eclipse glasses. But what was really special was how this event really brought our team and our community together.”

A local doctor helped direct traffic in the store, and a local CPA helped create a spreadsheet to track all of the eclipse glasses preorders, Lukowiak says.

“After placing our final order, we were pre-selling to customers eager to get a pair and ended up selling 1,700 glasses,” Lukowiak says. “Once the order came in, we had lines of customers waiting and would check their name off a list once they arrived. Our staff and community were integral at making this whole process run smoothly.”

Over the course of the final days leading up to the eclipse, the foot traffic to the store was massive, with hundreds of people lining up to pick up their own eclipse glasses, which led to many customers also shopping for other items in the store.

“People came into the store from our area and some outside of it,” Lukowiak says. “Many customers didn’t know we were here, but the positive response I got from people was huge, and we gained many new customers in the process.”

After days of hard work, thousands of phone calls and the store often reaching full capacity, Lukowiak says the entire staff was excited to be able to celebrate and watch the eclipse together.

“We closed the store for two hours from 1 p.m. to 3 p.m.,” he says. “Our entire team was very tired, but very proud that we handled what we did. We are a small store, but this made us the local celebrities for a few days.”

While the view of the eclipse in Alpharetta was 98 percent totality, Lukowiak says it was special because it was a once-in-a-lifetime experience.

“My mom and dad and my wife were all with me, and it’s just a really special thing,” he says. “In the moment, I’m realizing I am witnessing something that has no human involvement and is just a product of our universe. It is the only time I’ll get to experience it with all of the people I’m with, which made it a monumental moment for me.”

Sutherlands Lumber in Casper, Wyoming, began planning for the solar eclipse almost an entire year in advance. However, the business ramped up its planning as the hype started building, says Kyle Heffernan, assistant manager at the store.

“When we first planned for the eclipse, we ordered a few things, like specially made t-shirts and MoonPies,” Heffernan says. “When shoppers started asking for more t-shirts and requesting the solar eclipse glasses, we realized it was an opportunity to create a much bigger event.”

In addition to ordering eclipse glasses, Sutherlands ordered souvenirs like magnets, pens and t-shirts with the store logo, the date and location of the eclipse and the saying “I Survived the Eclipse”.

Since Casper was located in the path of totality, Heffernan says the entire city was prepared for an influx of tourists, all eager to see the natural phenomenon in person. The store worked with local groups around town, and a big event was held at the fairground, he says. Leading up to the eclipse that day, team members were invited to set up a booth and sell their remaining gear to eager eclipse viewers free of charge.

Additionally, the store held a sale and invited customers to enjoy the view from the parking lot.

“Since the eclipse took place on Aug. 21, we had a 21 percent off sale,” he says. “Then we closed the store for three hours and let our employees come out and enjoy the eclipse in the parking lot. We also purchased hotdogs and buns, invited the Future Farmers of America (FFA) to come grill them and offered them to our customers for donations to the FFA.”
According to Heffernan, participating in communitywide events like the solar eclipse is important and is something any retailer can and should do.

“I think retailers have to participate in things like this,” he says. “It’s the community that really supports us. While some retailers took advantage and raised prices on eclipse-related items, many in our neighborhood just wanted to be part of the fun and enjoy the experience.”

As for the eclipse itself, Heffernan says it was something he’ll never forget.

“I have seen partial eclipses before, but this was my first time seeing it in totality,” he says. “There is a halo around the moon from the suns corona, and then a diamond ring effect. This wasn’t just a split second, it was gray before and after, and then totally dark for a few minutes. It was an indescribable view.”

Renee Changnon is the retail outreach coordinator for NRHA. She meets with retailers in their stores and at industry events and introduces them to the services NRHA provides. Renee previously worked as a member of the NRHA communications team. She earned a degree in visual journalism from Illinois State University, where she served as the features editor for the school newspaper. After college, she implemented marketing and promotions initiatives at Jimmy John’s franchise locations across the country. She enjoys exploring books with her book club, Netflix marathons and hosting goat yoga at her apartment complex. Renee Changnon 317-275-9442 rchangnon@nrha.org
Previous Portable Solar Charger
Next New Homesense Chain Is ‘Reminiscent of a Home Depot or Lowe’s’