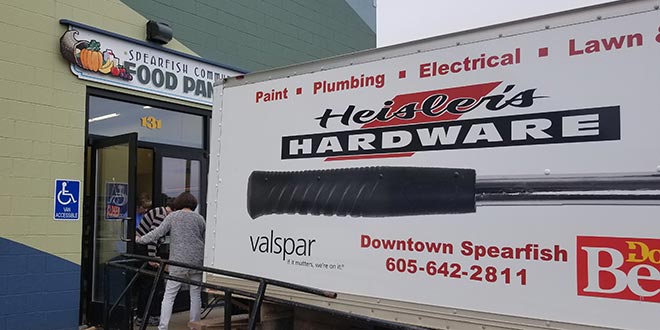 During the holiday season, homeless shelters and food pantries are overwhelmed by the amount of volunteers and donations that come through the doors. However, as the holidays wind down and the hustle and bustle of daily life returns, people may forget that donations are still in high demand.

When Callie Bowman, owner of Dakota Hardware in Sturgis, South Dakota, went to donate to her local food pantry and saw how bare the shelves were after the holiday rush, she knew she wanted to host a food drive to ensure her community was not going hungry.

“I went to the food pantry in Sturgis one day and I was shocked to see how low they were on food,” Bowman says. “For my own food drive, I thought March was a great offbeat month to focus and bring in as many donations as possible by using the hardware store as a platform.”

Before the competition got into full swing, Bowman was approached by Pam Heisler of Heisler’s Hardware in Spearfish, South Dakota, who asked about partnering up and making it a competition between their neighboring communities.

“After learning from Callie’s posts on Facebook about the competition and the need to collect food for their local food pantry, I learned the same could be said for my community’s food pantry as well,” Heisler says. “I asked her if we could work together and make it an effort between both towns.”

Throughout the month of March, Dakota Hardware and Heisler’s Hardware made it their mission to spread the word with their respective customers about their first annual food drive. Each store promoted the event on social media and through word of mouth, encouraging loyal customers to donate and even drawing in new customers who wanted to help feed the Sturgis and Spearfish communities, Heisler says.

“We set up a wheelbarrow in the store with signs indicating customers could donate to our food drive collection,” Heisler says. “As the weeks went on, we would pull out a new wheelbarrow once they were full and by the end of the month, we had four wheelbarrows full of food.”

After seeing Heisler’s Hardware utilize wheelbarrows, Dakota Hardware decided to piggyback off of them and try something similar at its store. Although Bowman says the food drive started off slowly, as customers began seeing the food pile up in front of the store, the word of mouth about the food drive led to more donations coming in.

As both stores are in separate communities, each operation found that different strategies helped increase donations. Dakota Hardware had more luck through paper receipt staplers promoting the drive and in-store verbal reminders alerting customers about the food drive, while Heisler’s Hardware was able to utilize social media to create buzz among customers, including new and loyal shoppers.

“I think effectively promoting something like this is huge,” Bowman says. “You need all your employees’ participation in helping get customers excited and to spread the word.”

Although Dakota Hardware collected a little more than Heisler’s Hardware, both stores were winners and together, they donated nearly 500 pounds of food to their local food banks by the end of March.

“People dropped off food, stayed and visited with us and we really saw our community rally behind us for this cause,” Heisler says. “Social media brought many customers to our store to donate food and then ultimately shop here as well. I was at the gas station after the food drive wrapped up and someone I never met saw me and congratulated me for the food drive and said he enjoyed seeing my posts on Facebook. That was such a surreal moment!”

While both stores enjoyed having a friendly competition to raise the stakes and encourage their customers to donate as much food as possible, Bowman says it was a great way for both store to give back to their communities in an innovative way.

“The needs of our community never go away,” Bowman says. “It’s easy to get caught up in running a business, but it’s nice to remind people that we’re local and we’re part of the community as well. Using our stores as a platform to encourage this was huge. We’re excited to do this event next year and hopefully can get more businesses involved. Doing things like this food drive shows customers that we’re here to support the community and hopefully in turn, they’ll support us. It’s truly a win-win situation!”

Renee Changnon is the retail outreach coordinator for NRHA. She meets with retailers in their stores and at industry events and introduces them to the services NRHA provides. Renee previously worked as a member of the NRHA communications team. She earned a degree in visual journalism from Illinois State University, where she served as the features editor for the school newspaper. After college, she implemented marketing and promotions initiatives at Jimmy John’s franchise locations across the country. She enjoys exploring books with her book club, Netflix marathons and hosting goat yoga at her apartment complex. Renee Changnon 317-275-9442 rchangnon@nrha.org
Previous Ace Hardware Partnering With 4 Giant Eagle Grocery Stores
Next Camouflage Cooler 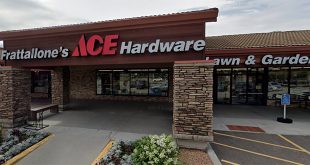 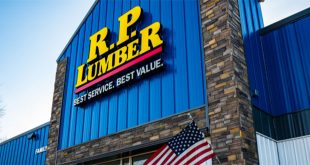 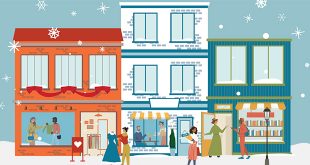