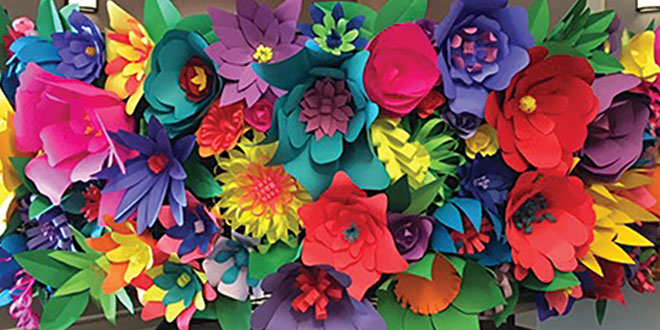 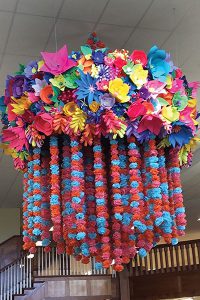 Customers visiting Keim Lumber in Charm, Ohio, during the store’s recent anniversary sale saw a stunning sight as soon as they walked in the door.

In the store’s lobby hung a large chandelier made of more than 1,700 paper flowers, all handmade by several of the store’s employees.

“Each year, we try to do something creative for our annual anniversary sale,” says Abe Troyer, Keim Lumber’s executive sales director.

“We had a team put together some ideas for something unique or eye-catching, and they decided on the chandelier,” he says.

A group of about five store staff contributed their talents to creating the chandelier. They cut colored craft paper and tissue paper and folded them into the shapes of different flowers, Troyer says. Another staffer helped with the project by building the metal frame they could suspend from the ceiling. When the flowers were finished, staff arranged them on the frame.

The four-day anniversary sale brought in about 14,000 customers, and the chandelier was definitely noticed, he says.

“We had a great reaction from our customers when they saw the chandelier,” he says. “It was awesome.”

Liz is the special projects editor for Hardware Retailing magazine. She reports on news and trends, visits retailers, and attends industry events. She graduated from Xavier University, where she earned a degree in English and Spanish and was a member of the swim team. Liz is a Louisville, Kentucky, native who lives in Indianapolis with her husband and two children. She enjoys swimming, reading, doing home improvement projects around her house and cheering on her two favorite basketball teams, the Kentucky Wildcats and the Xavier Musketeers.
Previous Custom-Designed Lanyards
Next Hardware Retailing Digital Edition – July 2017