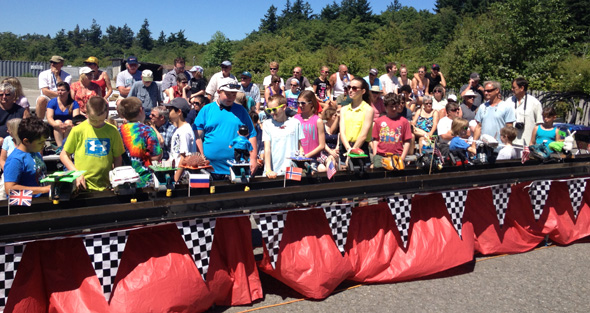 At Nielson’s Building Center in Point Roberts, Wash., a belt sander is used for so much more than sanding.

It’s the star of the company’s belt sander drag races, an event that’s become well-known throughout the community.

In June, staff at Nielson’s held the racing event in conjunction with the store’s 50th anniversary celebration. There were more than 20 entries in the double-elimination tournament, which included prizes for race winners, oldest and youngest participants and the best-decorated sander.

“We did this for the first time back in 1989 as part of a customer appreciation party,” store owner Lorne Nielson says. “It became a big success, and we’ve done it 20-plus times over the years.”

Local businesses donate prizes, he says, and get in on the fun, too. “We have two banks in Point Roberts, so we included a competition between the two banks and their sanders. It’s a friendly competition.”

Nielson set up a 30-foot track for the race and provided the power for the sanders to race. “It’s pretty simple—sanders race two at a time and zip down the track. Whoever crosses the finish line first wins. Since it is double elimination, everyone gets to race at least twice.”

Thinking a belt sander race would work in your store? Make sure you have all the equipment you need in advance, including a track and power source. Think about asking other local businesses to donate prizes or sponsor the race. You can even offer a few in-store demonstrations in the weeks leading up to the event as a way to promote it and encourage interest among your customers.

Liz is the special projects editor for Hardware Retailing magazine. She reports on news and trends, visits retailers, and attends industry events. She graduated from Xavier University, where she earned a degree in English and Spanish and was a member of the swim team. Liz is a Louisville, Kentucky, native who lives in Indianapolis with her husband and two children. She enjoys swimming, reading, doing home improvement projects around her house and cheering on her two favorite basketball teams, the Kentucky Wildcats and the Xavier Musketeers.
Previous Store Gears Up for Bike Sales with New Display
Next Store Promotes Project to Help Underprivileged Girls