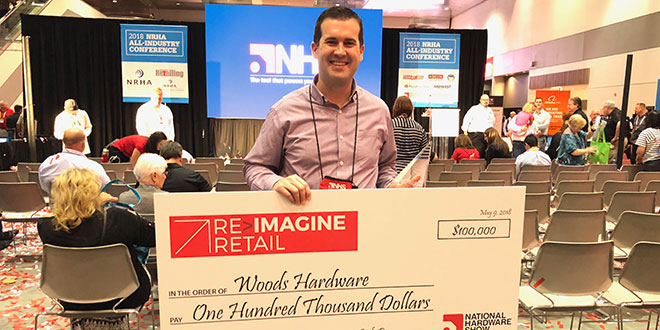 For one lucky retailer, a trip to Las Vegas has paid off.

On May 9, Matt Woods with Woods Hardware in Cincinnati was named the winner of the 2018 Reimagine Retail program.  Woods was honored at the North American Retail Hardware Association (NRHA) All-Industry Conference in Las Vegas.

Reimagine Retail is now in its second year and awards one entrant with $100,000 to invest in their proposed project.

Woods’ plan involves using technology to better serve his customers. Woods Hardware will use the prize to offer same-day delivery to customers within a 3-mile radius of each of its five stores. Using a 3D walk-through of one of his stores, Woods’ plan involves allowing customers to virtually walk through the aisles of the store, click on an item and have it delivered the same day.

“I couldn’t be more excited,” Woods says. “We had this ready to rock and roll and just have to hire the team to upgrade our systems. With this prize, we can start taking steps to put our plan into action.”

Lau used his 2017 Reimagine Retail winnings to open an in-store eatery at his hardware and sporting goods store in his hometown of Soda Springs, Idaho.

Todd is trends editor for Hardware Retailing magazine. He graduated from Indiana University where he majored in journalism and French. Throughout his career, he has aimed to highlight small businesses and their community value. He joined NRHA in 2017.
Previous Multipurpose Sealant
Next Vertical Outdoor Cooker