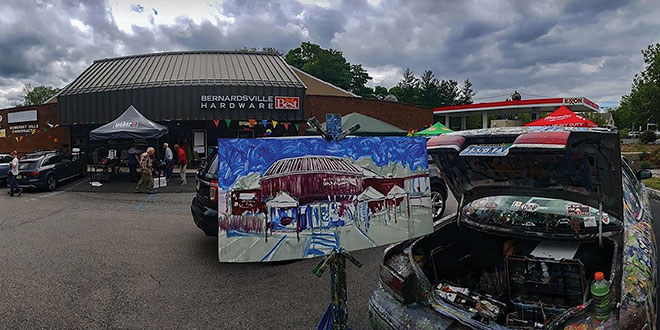 The first day a store is open for business means a lot of emotions and questions for an owner, including excitement, trepidation, pride and the always-present inner voice asking, “Will anyone show up?”

So, when a plan comes together like it did for Bernardsville Hardware in Bernardsville, New Jersey, what better way to commemorate the event than in the enduring medium of paint? Owners Drew and Renee Hubiak’s expansion plan may not have come about the way they had planned, but the end result looks to be on a great track for the future.

Drew Hubiak had already been in the lumber and hardware business for close to 20 years, owning Califon Lumber Co. in Califon, New Jersey. Hubiak had his eyes out for another location but hadn’t found one that both piqued his interest and made sense financially. That’s when the location for what would become his new Bernardsville location became available unexpectedly.

Through a two-year process that included a market analysis, with the help of his co-op, Hubiak was able to purchase the location and do a complete remodel to make it a destination for new and returning customers alike.

To celebrate the grand reopening, he invited vendors, customers and an old artist friend to help make May 6 a memorable day for all involved.

The day included food and drinks, giveaways and much more.

“We received many door prizes to give away. The response we got from both vendors and customers was almost overwhelming,” Hubiak says. “We’re excited about some of the events and programs we want to put in place.”

While customers enjoyed hot dogs and vendor booths with products to try out, Hubiak had an old friend hard at work commemorating the store for the future.

An abstract artist who had painted at previous events was on hand to put his own take on the Bernardsville store, bringing along his iconic, paint-covered car for an added bit of fun. Children were asked to put their own designs on the car during the event as well.

“The artist and I have known each other a long time, going back to when it was just our lumberyard and events we had there,” Hubiak says.

“He got in touch, and we asked if he would like to come out for the reopening,” he says.

“We’re really excited, because we’ll soon have the painting ready for display in the store,” he says. “We’ll be able to put his painting up and remember what a great day that was.”

Chad is an assistant editor for Hardware Retailing magazine. A Purdue University graduate, Chad has covered sports and news at the high school, college and Olympic levels as a sports writer, editor and designer for multiple newspapers. Prior to joining the NRHA, he was the sports editor for the Herald Journal in Monticello, Indiana, and a designer and copy editor for the AIM Media Indiana group in Columbus, Indiana. When not cultivating his beard, he enjoys backpacking, cooking, traveling and watching too much sports and Netflix.
Previous Deer Dragger
Next Patio Umbrella