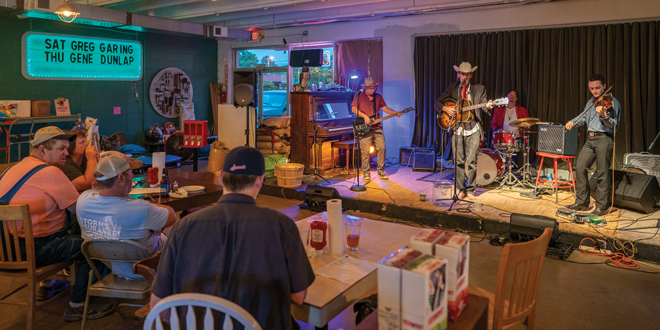 If you stop by Joelton Hardware, Feed & Farmacy in Joelton, Tennessee, you might find the owner ordering plumbing parts for a customer, setting out fresh tomatoes to sell or singing on stage with a country music band.

Kris McCarthy Houser, who bought the store in 2016, has made the business as eclectic as her interests. The operation includes a restaurant and bar that serve locally grown food and craft beer in a 1,000-square-foot space with a stage for live music.

The hardware store, which takes up about 4,000 square feet of the facility, sells organic animal feeds, locally grown produce, CBD products and core hardware categories, such as electrical, plumbing and hand tools.

Kris has created a viable business model she loves by diversifying the hardware store to sell farm-raised fruits and vegetables and opening a restaurant with space for musicians to perform.

“It’s kind of becoming the honky-tonk hardware store,” she says. “I’m a local food freak and I love to hang out with musicians.”

Kris and her husband Eliot Houser moved to the rural community of Joelton in 2006 to raise their two children. They wanted a little land with plenty of space for their children to play.

They bought a 20-acre homestead 15 minutes from East Nashville where they could nurture an interest in raising organic food and still spend their weekends with musician friends.

Eliot plays guitar and a variety of other musical instruments. Kris mainly sings, but plays a little piano, guitar and drums.

“We live in a town where everyone is a songwriter. My husband and I are songwriters,” Kris says. “Before we had this stage at the store, we would hang out in our barn with our songwriting friends. It’s just what we did before we had a hardware store.”

After they bought their homestead, Kris took full-time care of their children, daughter McCarthy and son Frankie, who were both under the age of 2. She began raising chickens, cattle and sheep and grew a few vegetables. She also got to know other local farmers and learned about the products necessary for organic farming.

Kris also started shopping at Swain’s Hardware, which originally opened as Cochran’s in 1964 in Joelton. The store had changed owners multiple times and eventually ended up under the oversight of Harry Swain, a second-generation owner who didn’t want to work in retail.

Harry’s son, Lee, inherited the business after the Housers moved to Joelton. He had promised his father he would keep the store open for at least five years.

Swain soon sold the hardware business to Donald Clark, a west Tennessean who wanted to move to the Joelton area. Whenever Kris shopped at the hardware store, Clark tried to talk her into buying chicken feed from him. Before long, their conversations about organic chicken feed changed to bigger topics.

Clark told her she needed to buy the store and shared store sales data with her.

To her own surprise, Kris was interested. Clark suggested that she could choose her own animal feed and sell it to herself at a discount.

“I realized I was going to have to go back to work,” Kris says. “I was intrigued by the idea of offering more and better feed for our neighbors.”

Eliot was chief information officer for a software development company in downtown Nashville. McCarthy and Frankie were 13 and 12 and attending school in Nashville. The timing worked for their family, so Eliot and Kris bought the store and changed the name to Joelton Hardware.

They didn’t have a clear vision for what they were going to do with the store, but they thought they might make some updates and then resell it.

Kris plunged into getting to know the business with the help of one part-time employee, who stayed with the store when the Housers bought it.

“I agreed to buy the store if Ben Hancock would agree to stay. He grew up here,” Kris says. “I don’t know that I would’ve been able to stay open without him.”

Kris had her work cut out for her when she showed up for her first day as business owner on Nov. 1, 2016. She knew very little about operating a retail store and had no experience working in the home improvement industry.

Just from shopping at the store, Kris understood that the inventory was lean. She didn’t know how much effort it would take to make the store profitable.

“I realized pretty quickly it wasn’t a very financially viable business,” Kris says. “I was stressed and worried that I’d bitten off more than I could chew and was in over my head.”

Then things began to go right. A friend with a shared interest in sustainable agriculture introduced Kris to a landlord who was willing to lease a better building to her.

The new location was in the same shopping center, but was three times bigger and available for the same price for rent.

With the help of friends from Nashville, Kris and Eliot wheeled the old store’s contents down the sidewalk in old grocery carts and started unpacking in the new location.

“It was grueling,” Kris says.

Kris is still learning about hardware, but business is going well and she thinks the best is yet to come. She knows her customers well and is always eager to tweak her product mix to meet their needs, equally willing to sell toilet flappers, cold beer and guitar strings.

“One of my favorite phrases is, ‘I’m sorry I don’t have what you’re looking for, but thank you for helping us be a better store. Is this something I should carry on a regular basis?’” she says.

The larger retail space allowed her to convert part of the store into a restaurant, opening opportunities to partner more closely with the farmers she wanted to serve with non-GMO animal feed and whose crops she hoped to sell. Her farm-fresh chicken eggs were perpetually sold out.

“That helped me see people were really hungry for local food,” she says.

Kris added “Farmacy” to the store name to reflect her emphasis on healthful food being as important as medicine for good health. She started to sell sandwiches and salads, doing her best to source all of her ingredients locally. She also began making her own probiotic drink and sauerkraut to sell. Her focus on selling healthy ingredients from area farms and supporting local like-minded farmers attracted attention.

“We try to be farm-to-table when we can,” she says.

In early 2020, Lee Miller, a chef who was working as a handyman due to the COVID-19 pandemic, walked into the store. He loved her vision for creating a space in the hardware store for hanging out and eating healthy local food.

He began working full time with Kris, creating the menu, doing all the cooking and providing handyman help as needed. He also curates the beer selections, which include locally made options and picks from around the world.

“I feel like local food is the magic ingredient for this business,” Kris says. “Farmers, musicians and locals all seem to love it.”

Miller launched the restaurant and bar—now known for top-notch cheeseburgers and beer—with a crawfish boil. Respected country music artist Greg Garing showed up to the boil and liked the venue. In March 2021, Garing offered to start playing for tips at the store.

Suddenly, Joelton Hardware became a destination. Locals have become regulars, showing up for the food and music again and again.
The food and music have complemented the hardware store better than Kris imagined they would.

“We’re on the outskirts of Music City, USA,” Kris says. “We have a plethora of incredibly talented folks come in the door who say, ‘This store reminds of what Nashville used to be like.’ I just really had no idea it would be such a good, organic fit.”

Kate is profiles editor for Hardware Retailing magazine. She reports on news and industry events and writes about retailers' unique contributions to the independent home improvement sector. She graduated from Cedarville University in her home state of Ohio, where she earned a bachelor's degree in English and minored in creative writing. She loves being an aunt, teaching writing to kids, running, reading, farm living and, as Walt Whitman says, traveling the open road, “healthy, free, the world before me.”
Previous Empower Managers With Online Training
Next Contactless Commerce Brings New Opportunities 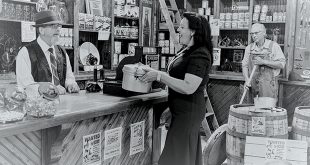