Home » Promotions » Store’s Ad is Made for the Big Screen 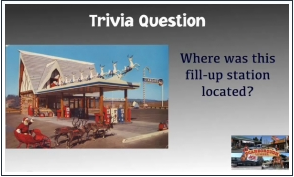 Store’s Ad is Made for the Big Screen

A couple of years ago, when the staff at Scarborough Lumber, with five locations in California, searched for new ways to drive traffic to their garden center, they found their solution in a nearby business: the local movie theater.

The nearby theater and restaurant was selling space for local ads to be shown in the time leading up to the start of a movie.

“It took a big part of our budget, but we wanted to give it a try,” says Mikala Clements, store manager. “We’ve done TV, radio, print, everything—and everything eventually is less effective, so we decided to take the plunge.”

The ad package Clements purchased includes the appearance of two ads for the store during the 10 minutes before the start of a movie at the theater. Scarborough Lumber’s ad incorporated a trivia game, which has a photo of a local historical location and asks moviegoers to identify it. The answer appears on the screen shortly after.

“We wanted to tie a game into our advertising,” Clements says.

Take a look around your community and see where you might be able to promote your store. Think of the habits of local residents—what they do and what places of business they frequent. “It’s a different form of advertising, but it’s worked well,” Clements says. “Almost everybody goes to the movies, and they see our ads when they’re just sitting there, waiting for the movie to start. It’s a captive audience, so it’s easier to reach them.”

Liz is the special projects editor for Hardware Retailing magazine. She reports on news and trends, visits retailers, and attends industry events. She graduated from Xavier University, where she earned a degree in English and Spanish and was a member of the swim team. Liz is a Louisville, Kentucky, native who lives in Indianapolis with her husband and two children. She enjoys swimming, reading, doing home improvement projects around her house and cheering on her two favorite basketball teams, the Kentucky Wildcats and the Xavier Musketeers.
Previous A Quick Fix for Merchandising
Next You’ve Got Mail: Try In-Store Mail Services