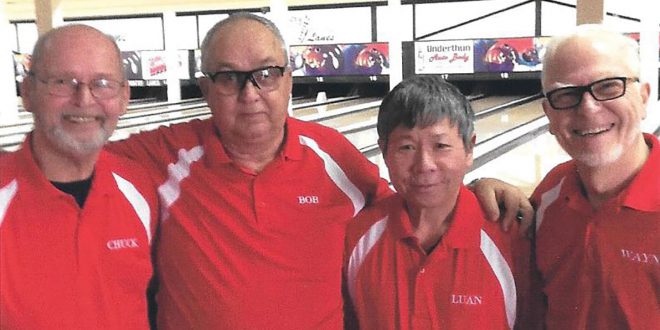 Marshall Hardware in Duluth, Minnesota, has kept a tradition alive for over 15 years.

What started as an employee bowling team has seen some changes during that time, but one thing hasn’t changed: Marshall Hardware still knows how to get its name out into the community while having a good time.

The store has worked with several community organizations by contributing its name and some funds to various groups. One has been a bowling team that competes in a local league.Marshall Hardware serves as a sponsor for that team.

“It started with a longtime customer who asked if we would be interested in helping out a bowling team. It’s not a true ad campaign, but we like to get involved in groups on our end of town,” store co-owner Steve Marshall says.

Steve and co-owner and brother Scott Marshall have owned Marshall Hardware for 40 years. Their grandparents started the company in 1939, and it’s been in the family ever since.

The family is still involved with bowling—Steve was part of the original employee team, and his nephew bowls in another team in the same league.

Other organizations that Marshall Hardware works with include an area Little League team as well as an annual golf tournament, where the store provides headgear with its logo for a sponsored team.

“You never know when you can reach someone with your name,” Steve Marshall says. “It can be at any time. Maybe they see your logo and it triggers a memory or an urge to finish a project. That’s how we look at keeping our name in the community.”

Chad is an assistant editor for Hardware Retailing magazine. A Purdue University graduate, Chad has covered sports and news at the high school, college and Olympic levels as a sports writer, editor and designer for multiple newspapers. Prior to joining the NRHA, he was the sports editor for the Herald Journal in Monticello, Indiana, and a designer and copy editor for the AIM Media Indiana group in Columbus, Indiana. When not cultivating his beard, he enjoys backpacking, cooking, traveling and watching too much sports and Netflix.
Previous Portable Shopping Cart
Next Boost Marketing Using These Email Resources