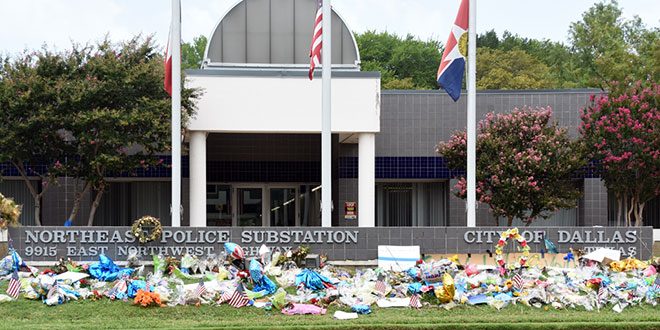 When a sniper shot 12 police officers, killing five, at a protest July 7 in Dallas, the community’s reaction was horror. And solidarity.

“Everybody was just so moved that everybody wanted to know, ‘What can we do?'” Andrea Ridout, owner of Gecko True Value Hardware in Dallas, says. “You would think this would cause a lot of tension around here, but it’s actually been the opposite.”

Independent home improvement stores are among the local businesses that have helped people in the surrounding areas find tangible ways to express their support of the fallen officers’ families, as well as the police officers still on duty.

Westlake Ace Hardware in nearby Farmers Branch, Texas, reacted quickly when a friend of Michael Smith, one of the five officers who was killed, called the store asking to host a fundraiser in its parking lot. Smith had occasionally shopped at the Farmers Branch hardware store, and his family lives in the area.

General manager Jose Valdez’s response was, “We have to be able to do it.”

The shooting was on a Thursday, and it was late the next day when Smith’s family friend called Valdez. So Friday evening, Valdez made quick phone calls to Ace Hardware to figure out how to make a fundraiser happen in less than two days.

“It was just the right thing to do. It was just about the family,” Valdez says.

What happened next was beyond what anyone expected. A grocery store donated food. A movie theater company donated popcorn and cotton candy. A snow cone business volunteered to give out cold treats. A pro baseball player and football player donated autographed balls for a raffle. A restaurant gave pizzas.

Within three hours that Sunday, thousands of community members, including police officers, showed up at the store and donated nearly $38,000 in cash and checks to help Smith’s wife and two daughters with funeral and living expenses.

All 15 of the Westlake Ace store’s employees volunteered their time to help, and they used store grills to cook hot dogs. All Westlake stores in the region began accepting financial donations at their cash registers.

Cars flooded the store parking lot, and thousands of people mingled and donated money. They were incredibly generous, and many gave money without accepting any of the food being given away in exchange for donations, Valdez says. The money donated at cash registers hasn’t been tallied yet.

In Gecko True Value Hardware’s Dallas neighborhood, which is about 10 miles from where the shooting occurred,  locals are tying blue ribbons around trees and replacing their typical porch lights with blue bulbs to express their unity and support of both fallen and surviving police officers.

Locals have been stopping in at Ridout’s store asking how to help, and Ridout refers them to the police substation located around the corner to donate money. People have also brought gifts and flowers to put outside the police station as expressions of support.

Ridout is giving away blue porch lights in hopes that every local street will glow a little blue for the officers’ sakes.

“Wouldn’t it be a wonderful thing to be a policeman and just see a row of blue lights as far as they can see?” she says. “To know, as a police officer, that every house on this street supports me? It just seems to me that that’s a powerful thing.”

Kate is profiles editor for Hardware Retailing magazine. She reports on news and industry events and writes about retailers' unique contributions to the independent home improvement sector. She graduated from Cedarville University in her home state of Ohio, where she earned a bachelor's degree in English and minored in creative writing. She loves being an aunt, teaching writing to kids, running, reading, farm living and, as Walt Whitman says, traveling the open road, “healthy, free, the world before me.”
Previous Lowe’s App to Offer 3-D Planning Aids via Phone
Next Work Gloves