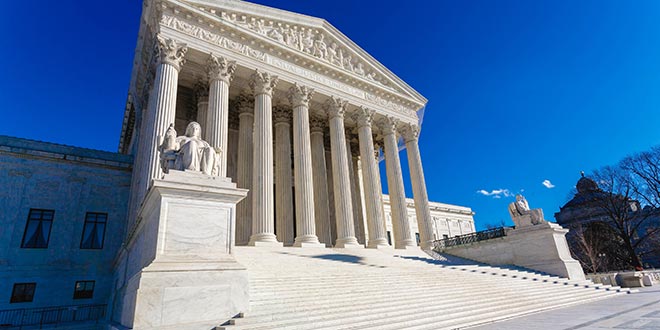 The U.S. Supreme Court ruled June 21 that online purchases can be subject to the same state and local taxes as purchases made at brick-and-mortar locations, The New York Times reports.

This week’s decision in South Dakota v. Wayfair, Inc. establishes that states may require online retailers to pay taxes on purchases where the businesses do not operate physical stores.

In 2016, South Dakota passed a law that required internet retailers “to collect a 4.5 percent sales tax if they had more than $100,000 in annual sales or more than 200 transactions in the state,” The New York Times says. State officials had then filed, but lost, lawsuits against three online businesses for violating the law, the article says.

The Supreme Court’s June 21 decision has set a new precedent by backing South Dakota against an online company.

“Retailers have been waiting for this day for more than two decades,” Matthew Shay, president and CEO of the National Retail Federation, says in a statement.

“The retail industry is changing, and the Supreme Court has acted correctly in recognizing that it’s time for outdated sales tax policies to change as well. This ruling clears the way for a fair and level playing field where all retailers compete under the same sales tax rules whether they sell merchandise online, in-store or both.”

The issue of online retailers not paying state and local taxes has long been a concern for small business owners, many of whom say online merchants have had an unfair tax advantage.

Speaking to The New York Times, Carl Davis, research director at the Institute on Taxation and Economic Policy, says the court’s decision will benefit states and brick-and-mortar retailers.

“This is going to allow state and local governments to improve their tax enforcement and to put local business on a more level playing field,” Davis says.

Todd is trends editor for Hardware Retailing magazine. He graduated from Indiana University where he majored in journalism and French. Throughout his career, he has aimed to highlight small businesses and their community value. He joined NRHA in 2017.
Previous Flammable Paracord
Next Dollar General Pilots App for Mobile Checkout