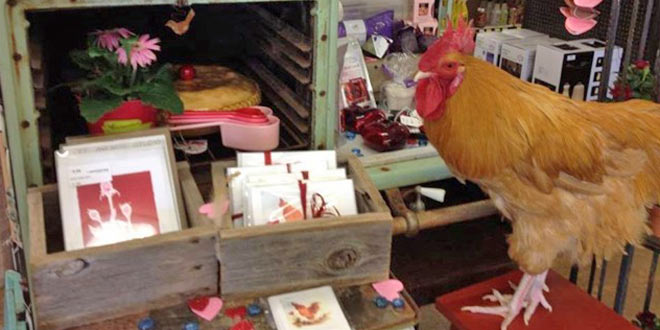 At Gecko Hardware in Dallas, Texas, customers come from near and far for the chance to meet and play with the store mascot, a rooster named George.

The Buff Orpington rooster has made quite a name for himself and Gecko Hardware since he was brought in by his first owner. According to Andrea Ridout, owner of the store, George was purchased as a newly hatched chick by a family with a little girl. She named the chick Queen Elizabeth, but as the chick grew up, the family discovered he was a rooster, not a hen, and Prince George was born.

“When he was three months old, he started to crow, and the family brought him in,” Ridout says. “They needed to find George a place to go where it was legal to have roosters in the backyard. We didn’t intend to keep George, but it went from him living in the store for a week, to a month and then he was a fixture of the store.”

In order to keep George at the store, Ridout says he became a certified therapy bird. Now, she takes him to area schools for visits and he has had more than a thousand kids pet him, she says.

To keep George happy and comfortable, they have an outside coop for nice weather and when it’s bad, he has an inside coop.

To add to the feathered fun, George now has a companion hen named Gracie that has joined the Gecko Hardware family.

“A gentleman came and said he had a hen who was getting picked on at his farm and asked if we could take her in,” Ridout says. “She was the same breed as George and they just clicked. They’ve had three clutches of babies.”

To accommodate all the visitors that come to the store to see and play with George and now Gracie, Ridout leaves scratch for kids to feed him.

This unusual hardware mascot has even gained some fame from news sources like the Associated Press, Buzzfeed and the Dallas Observer even voted him as the best mascot. As he continues to grow in popularity, Ridout says she loves sharing the moral of George’s story with those they meet, like the school children he visits.

“I always tell kids, the worst thing that could happen for a chicken is for it to end up being a rooster,” she says. “Instead, it’s been a wonderful thing for us and I think he is very happy and content. He truly is the biggest draw I’ve ever seen and I’ve owned businesses for 33 years.”

Renee Changnon is the retail outreach coordinator for NRHA. She meets with retailers in their stores and at industry events and introduces them to the services NRHA provides. Renee previously worked as a member of the NRHA communications team. She earned a degree in visual journalism from Illinois State University, where she served as the features editor for the school newspaper. After college, she implemented marketing and promotions initiatives at Jimmy John’s franchise locations across the country. She enjoys exploring books with her book club, Netflix marathons and hosting goat yoga at her apartment complex. Renee Changnon 317-275-9442 rchangnon@nrha.org
Previous Pet Adoption Day: Keck Hardware
Next Five Ways to Do More with Your Community Donations