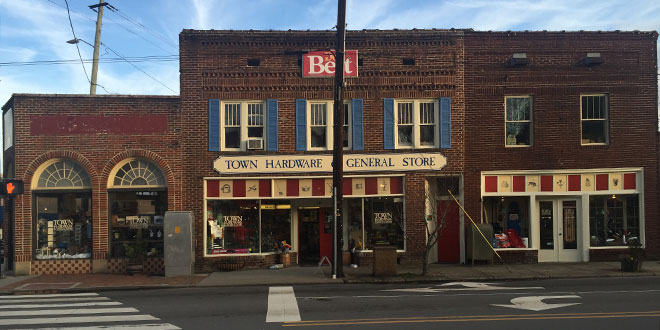 While many long-time hardware stores are passed down through families, Town Hardware & General Store’s many owners over the last 90 years just seemed to be at the right place at the right time to enter the hardware retailing industry.

Such is the case with the store’s fifth and current owners, Peter and Beth Ballhaussen, who purchased the business in July 2013.

“We kind of stumbled upon the hardware store, to be honest,” Peter says. He was laid off from a corporate telecommunications position in late 2012 and was ready for a new career.

He and Beth were attracted to the iconic, old-fashioned hardware store that sits at the corner of West State Street and Broadway in Black Mountain, North Carolina, a town of about 8,000 full-time residents.

“We were blessed with some money set aside and decided to do our own thing. We had property here, so we had visited the store a number of times. We had planned to retire here,” he says. “I’ve renovated houses and previously owned a landscaping business, so hardware didn’t seem like a foreign industry.”

Beth had taught music for more than 30 years, so retail was a major change for her. However, the couple decided the business was right for them.

“We prayed about it and felt that we were led here,” she says.

Black Mountain sees a population boost in the summer and fall with tourists coming into the mountains for vacations, camping and hiking. Town Hardware is a 5,000-square-foot store and sells products from traditional hardware store categories like electrical, plumbing and paint.

The Ballhaussens also developed a knife and axe niche. “We attract a lot of people who buy sharp and pointy things,” Peter says.

The store is a destination for the niche because it offers a blade-sharpening service. “We had a customer come from an hour away to get her scissors sharpened,” Beth says.

The store has seen many changes throughout its lifetime, some small, and some large, including two expansions into neighboring vacant stores in the 1960s and 1990s.

“Every owner has put their stamp on it,” Peter says. The residents of Black Mountain have supported each new owner.

“We joke that the community kind of owns the store and we’re just caretakers,” Peter says. “When we first got here, customers would say ‘don’t change anything.’ The community takes ownership of the store, and that’s why it’s been here so long.”

The Ballhaussens have made changes to the store to improve efficiency and make it easier for customers to shop. Last year, the couple reconfigured the entire hardware department and added location codes to enhance restocking.

They also updated the store’s website in 2016 to increase online product sales, expanding the store’s customer base across the country.

“We’re constantly tweaking things. I think you have to in order to be relevant,” Peter says.

The Ballhaussens expanded the product mix in the store to appeal both to tourists and locals, adding a more diverse grill selection and a book nook that offers guidebooks to local attractions and hiking trails, as well as books by local authors and children’s books. Books on sustainable living are available for customers who are seeking a “back-to-nature” lifestyle.

“Our locals are pretty serious about Made in USA and locally sourced products, so we are sure to carry those items,” Peter says. They also stock a variety of classic games and toys.

The changes to the store didn’t alter the way the Ballhaussens do business.

“We try to take people right to the item they’re asking for,” Beth says. Local and tourist customers alike appreciate the personal service.

“I had a customer come up to me with tears in her eyes and she said ‘Once again, we just so appreciate you and the products you have and your service,’” Beth says. “We have customers who grew up in the area and then moved away, but they bring their kids and grandkids back to the store when they visit.”

Melanie is the communications and content manager for the North American Hardware and Paint Association. She joined the NHPA team in 2016 as an editor for Hardware Retailing and now helps lead the communications team to deliver relevant, timely content to the industry.
Previous Tech Tools for Retail Stand Out at National Show
Next Self-Adjusting Pipe Wrench