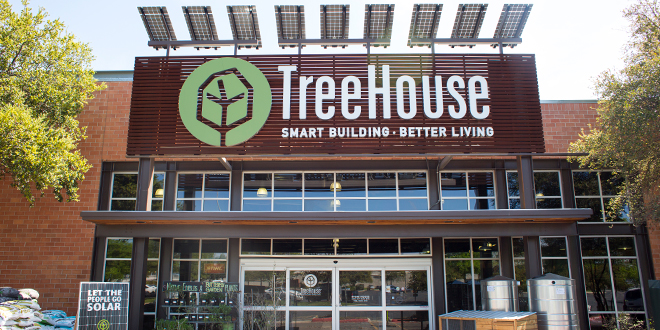 TreeHouse CEO Gary Kusin was recently interviewed on the National Retail Federation’s podcast series, “Retail Gets Real,” where he shared insights on the company’s strategy and focus moving forward.

During the conversation, Kusin discusses the home improvement market and the company’s focus on the emerging “do-it-for-me” market. Kusin says this segment is worth approximately $200 billion and TreeHouse is uniquely positioned to connect customers with qualified contractors to build safer, healthier living spaces.

“What we’re doing at TreeHouse is trying to completely disrupt the home improvement and remodeling industry in the U.S.,” Kusin says.

“Our objective at TreeHouse is to give someone the option to have someone do it for them completely,” he says. “Literally taking them from idea creation all the way to installation of a project.”

When asked what drives customers to seek out TreeHouse’s services, Kusin says the do-it-for-me aspect is the main driver.

“When people learn about the sustainable aspects of our projects, it makes them feel even better, and they’re confidence in us as a provider grows,” he says.

“This is a category that cannot be disintermediated by Amazon or anyone else. Every single project we do is a unique, customized specialized solution for an individual homeowner. So, there is no one who can come take our lunch,” he says.

He also spoke about TreeHouse’s plans for the future, including expansion. He says the company is proceeding cautiously though, ensuring that it has its base functions ironed out before diving into new regions.

On May 14, TreeHouse announced it was closing its original location in Dallas, Texas. At that time, the company added that it was shifting its strategy away from retail sales and focusing on “project-based sales.” Prior to this, TreeHouse founder Jason Ballard spoke at the North American Retail Hardware Association’s (NRHA) All-Industry Conference.

“I can’t tell you how important the whole notion of reducing the carbon footprint of homes and selling sustainable products [is]. It is a bold mission, it is a mission that attracts incredibly good people and it has enabled us to build a team that punches way above its weight class,” he says.  “We’re very proud of what we’re doing here.”

Todd is trends editor for Hardware Retailing magazine. He graduated from Indiana University where he majored in journalism and French. Throughout his career, he has aimed to highlight small businesses and their community value. He joined NRHA in 2017.
Previous Berkshire Hathaway Gives $2B Loan to Sears CEO’s Real Estate Group
Next Industry Manufacturers and Distributors Talk Aluminum and Steel Tariffs