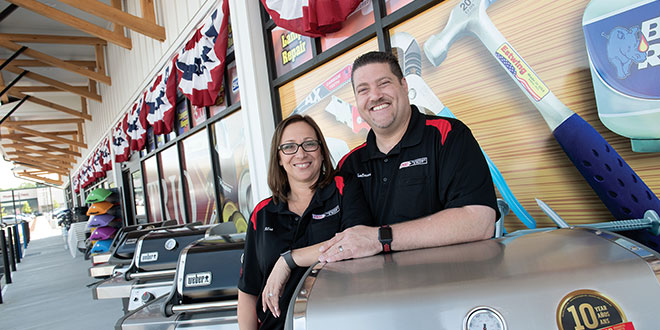 Small business owners often hear from customers how important their businesses are to the community, but it’s not quite as common that they see those comments in action. Todd and Ritsa Kirschner, owners of Trio Hardware in Plainview, New York, saw their customers literally take to the streets to show their appreciation.

In 2018, the business moved from one store location to a new building about 1 mile down the road. Todd and Ritsa put out a call on social media and in the local paper asking for help to move inventory from the 3,100-square-foot store to the new location over the course of two days.

On the first day, 110 families moved the entire operation in six hours.

“It was unreal. The amount of people who showed up was incredible,” Todd says. “After everything was moved into the new store on the first day, we asked ourselves, ‘What are we going to do with everyone who’s showing up tomorrow?’”

Trio Hardware’s longevity in the Plainview community is part of the reason so many customers came out to lend a hand. The business has been in operation since the original owners opened it in the 1960s. It even sponsored Todd’s soccer team when he was 3 years old. The Kirschners themselves have been involved in the company for their entire professional careers. They both worked at the store while they were in high school in the 1980s and early 1990s, and they bought the business in 2017 as part of a thoughtful succession plan.

Todd started out sweeping the floors and stocking the business when he was 15, and then he continued working at the business full time while he was in college. A fire in 1996 made Todd rethink his initial career choice.

“I was offered a job in the film industry building sets, and the night I accepted that new position, the original Trio Hardware store burned down. I thought, ‘How do I give my notice now?’”

Instead of taking the new job, Todd changed his major to business marketing to support the company and decided he would stay to help them rebuild. The store reopened in the same location a year later, and at that time, Todd was named the store manager. Sales grew more than 35 percent in the first 18 months at the new location.

“I started talking to the owners about what my plans were. I told them I was going to stick it out, and I would be the first in line to buy the business when they were ready to retire,” Todd says.

“It’s a partnership, and at the end of the day, their job is to help us succeed. When it came down to the layout, together we came up with a great plan.”
—Todd Kirschner, Trio Hardware

The Kirschners and the original owners, Bruce and Francesca Carlow, developed a succession plan in 2010. The Carlows and the Kirschners became 50-50 partners in 2012, and then Todd and Ritsa took over the business completely in 2017.

In addition to its owners having a long history in the industry, Trio Hardware has had a long relationship with Do it Best. The company joined the co-op in 2002, and Todd says it was the company’s approach to customer service that sealed the deal for him.

“We were in the market for a new co-op at that time, and I checked them all out. Do it Best was the right fit because of the family atmosphere,” he says. “You can get anyone on the phone within minutes. It’s not ‘us and them,’ it’s ‘we.’ They treat people the way they want to be treated, and they have the answers to your questions.”

Top-to-Bottom Design
Before Trio Hardware could rally its customers to help move the business, they needed a building to move to.

The lease on their building was coming due, and the other business in the strip mall had just left. They originally had the opportunity to expand into that space, but it wouldn’t allow for additional outside space to expand their lawn and garden category. Coincidentally, Todd had a sales meeting with a developer who was working on a new project.

“He asked if we were interested in moving, and he asked me to make a list of our must-haves in a new property,” Todd says. “We gave him our list, and he came back with a plan to meet all of our needs. We couldn’t pass up the opportunity.”

With the help of Do it Best, they designed a brand new store that didn’t lose the character of the business the community was so fond of.

“One of our biggest concerns with building a new space was that it had to look like Trio Hardware,” Todd says. “Do it Best helped us get it done. I can’t say enough good things about how they helped us make it happen.”

Todd and Ritsa worked with Do it Best representatives to field a customer survey to find out what products and categories people would want in the new Trio Hardware location. Todd says that survey significantly helped with the planning process.

“It’s the best tool Do it Best has when you’re expanding or adding a new service,” he says. “It gathers demographics about your customers, and it really prevents you from sticking a lot of money in the wrong areas.”

In the way of products, the survey results reported that Trio Hardware customers wanted additional housewares and a larger selection of outdoor seasonal items. At their current location, the Kirschners knew they didn’t have enough space to expand those categories.

To meet their customers’ needs with the new location, Todd and Ritsa introduced their developer to the Do it Best design team.

“They’re so easy to work with. They make recommendations, but they’re open to doing things a different way,” Todd says. “It’s a partnership, and at the end of the day, their job is to help us succeed. When it came down to the layout, together we came up with a great plan.”

The collaboration resulted in a 5,600-square-foot salesfloor with an additional 1,800-square-foot garden center outside. To fill the new space, they added 11,000 SKUs.

“That’s something we would never have been able to do at our old location,” Todd says. “Every area got more product. We were able to expand more into power tools, which is something we barely sold before.”

“I have eight POS systems in the store,” Todd says. “It’s all about service. A customer will stand in your store all day long getting what they want, but the second they want to pay, it has to be quick. They don’t want to stand in a line.”

In addition to making it easier to check out, Todd and Ritsa also made it easier to shop by adding shopping carts.

“When your customers’ hands aren’t full, they grab more product,” he says. “We also offer free popcorn on the weekends, so they have something to snack on while they shop. It gets them to stay.”

Todd is also a primary member of the repair team at the store, which operates from the basement. He repairs nearly anything a customer brings in, from broken kitchen doors to window screens.

“They can’t check Amazon to see how much a repair is,” he says.

Going Online to Get Going
Todd knows that bringing in the next generation of consumers is key to maintaining the business into the future. He launched a Facebook account for the business many years ago, back when pages were first available for businesses. He also manages a YouTube page and Instagram account for Trio Hardware.

“You have to be current and relevant,” he says. “Everybody has a phone in their hand, so you need to use social media. In our area, the people who are my age are all on Facebook, and everyone in their 20s and 30s is on Instagram. I switch between the two platforms.”

Initially, Todd started by posting messages for the holidays and promoting sales, but then he evolved into posting videos for his accounts. To ensure consistent quality, Todd hired a local videographer to shoot the videos he posts online.

“We’re always looking to stay fresh,” he says. “You need to get the younger generations in the store, and this is how you do it. If you can get your message into their hands, that’s how you stay relevant.”

Once the social media posts get the younger generations into his store, Todd’s service philosophy doesn’t change.

“Anyone can sell a bolt, but it’s how you portray it and how you treat the customer that makes you different,” he says. “People love to shop where they are welcome, where you know their name. If you do that with selling hardware, you retain your customers.”

Melanie is the communications and content manager for the North American Hardware and Paint Association. She joined the NHPA team in 2016 as an editor for Hardware Retailing and now helps lead the communications team to deliver relevant, timely content to the industry.
Previous Bliffert Lumber & Hardware Puts Expansion Into Practice in Wisconsin
Next The Faces of Do it Best: Retailer Profiles