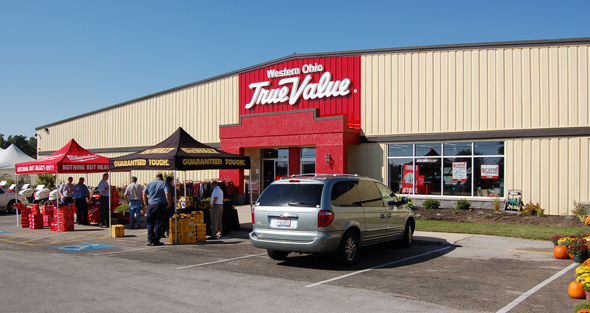 True Value Company’s expanded farm, ranch, automotive and pet product assortments, plus seasonal and plumbing categories, drove the majority of sales increases. Sales from new stores on a gross billings basis exceeded lost sales from terminated stores by $10.7 million for the first half of the year.

“In the second quarter, we saw a continuation of first quarter sales increases. In fact, on a year-to-date basis, we had revenue increases in all regions of the country and in all 10 of our product departments,” says President and Chief Executive Officer John Hartmann. “From a profit perspective, the incremental gross margin from the sales increase was offset by higher inbound freight expenses and our planned one-time expenses and retailer subsidies related to the roll out of our new ’Color by Design’ paint colorant systems, equipment, displays and collateral.”

During the first half of the year, True Value continued to grow its square footage and member base. In the six-month period, the company added 428,000 square feet of relevant retail space continuing its commitment to grow Destination True Value and other relevant retail space in its network. Conversions continued at an elevated pace with 34 new members signed to-date in 2014, for an estimated $11.9 million in new annualized handled business.

Liz is the special projects editor for Hardware Retailing magazine. She reports on news and trends, visits retailers, and attends industry events. She graduated from Xavier University, where she earned a degree in English and Spanish and was a member of the swim team. Liz is a Louisville, Kentucky, native who lives in Indianapolis with her husband and two children. She enjoys swimming, reading, doing home improvement projects around her house and cheering on her two favorite basketball teams, the Kentucky Wildcats and the Xavier Musketeers.
Previous Frank Blake Joins Delta Air Lines’ Board of Directors
Next Do it Best Corp. Announces Executive Leadership Transition