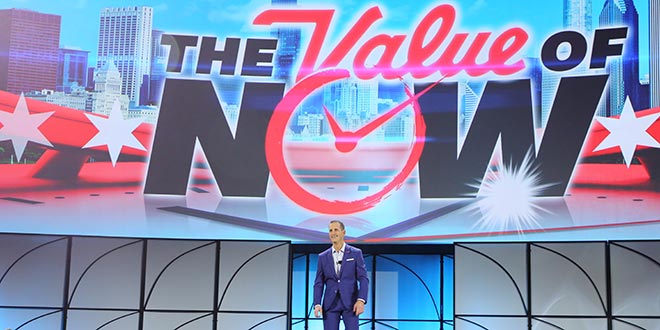 As retailers begin planning ahead for their busy spring selling season, those attending the True Value Fall Reunion were also encouraged to think in the moment.

Several company executives took to the stage during the general session to highlight the current state of the co-op, and the results that have come from groundwork laid three years ago. The main topics of discussion included the announcement of a new, locally based marketing program, a closer look at the benefits of investing in store remodels, an eye-popping paint merchandising opportunity and more.

John Hartmann, president and CEO, opened the show, welcoming True Value retailers and guests from competing co-ops and distributors and dismissing the “chatter” that had been swirling around the industry.

Next, Brent Burger, chairman of the board, took to the stage to further squash the rumors in recent months about the possible sale of the True Value co-op.

“As for recent speculation that we’ve all heard, it is a direct result of us fulfilling our obligations to you,” Burger says. “You can rest assured that if there is an opportunity for something beyond our current state, it will be your decision as shareholders, not that of management or the board, whether to pursue it. Bottom line is, we will continue to be focused on ensuring a bright and independent future.”

To recognize employees from all levels, True Value Company shared a video that highlighted the many ways the team came together to provide support during the recent hurricanes in Texas, the southeast and Puerto Rico. The video showed how the company was able to get 20,000 5-gallon gas cans, 30,000 cases of bottled water and 3,000 generators to those in need, as well as the drivers who took on more than 300 emergency deliveries.

Abhinav Shukla, senior vice president and chief operating officer, discussed the company’s pricing strategy, network optimization and a new merchandising tool for paint, called the “Inspiration Realized” color center. This was showcased to retailers on the show floor and is a modular program that can work in stores of all sizes. The color center includes areas for consultation and mixing as well as 1,200 color options.

Throughout the address, attendees also viewed clips of retailers across the country who demonstrated the variety of ways they are improving their operations and moving toward the plan True Value had set forth.

Tim Mills, senior vice president of growth, kept his presentation short and to the point. He emphasized the importance of starting a Destination True Value remodel to retailers who have yet to do so.

“We know through surveys, 1,000 or more of True Value stores have not been remodeled in the past 10 years,” Mills says. “In 2016, True Value supported 101 stores with our remodel program. They took a swing, invested in their business and are getting an immediate return. On average, those remodeled stores are up 6 percent more than those that didn’t remodel. That is the value of now.”

Gabriel Fuentes Perez, divisional vice president of international, showed retailers the impact of the co-op in countries around the world.

“The value of now philosophy has helped grow our international business tremendously in just three short years,” Fuentes Perez says. “Since 2014, we added 52 new members in 25 countries, and 11 of those countries are new to True Value. Right now, we have members in 60 countries around the world. The international business represents 7 percent of our overall True Value sales and its growth makes all of us stronger.”

One of the biggest takeaways from the general session was presented by Dave Elliott, the new senior vice president of marketing. Elliott laid out the details of the new 2018 marketing plan, which is focused on targeted marketing tactics to find the right consumers for retailers.

He shared a video to dive a bit deeper into the topic, driving home the potential online avenues bring to in-store sales, as $2 of every $3 are influenced by online behavior. To stay relevant and competitive, it’s important to evolve with today’s consumer, Elliot says.

This program won’t kick off until April. Hardware Retailing spoke with Elliott to gain more information on the plans ahead, which will be featured in a special Q&A.

Heath Ashenfelter, vice president of merchandising, rounded out the general session. He highlighted all of the greatest deals retailers could receive through 25 new Customized True Blue programs, all of which are being offered at half price. Plus, instead of waiting longer to receive them, retailers can receive the products in two months once the order window closes.

Before closing the general session, Hartmann took the stage one last time to remind retailers of the strategic plan that was laid out in 2014 and where the company is today.

“Tomorrow depends on what we do today, on what we all do now,” Hartmann says. “This doesn’t mean our world won’t continue to change. In fact, the reason to act now is precisely because the world keeps changing and now is our time. We’re better together now than ever before. Our job is to make it easier for you to do yours. Your job is to align the strategies and programs that work for you and put them to work now.”

A Packed Floor and Retail Education

Attendees at the show had many opportunities to score new products from a variety of first-time warehouse vendors, mingle with peers and find ways to educate themselves and their teams before returning to their businesses.

Several booths stood out to attendees walking through the convention center, from power tool demos that featured art being carved out of wood for people to watch, hammocks they could kick back and relax in, water filter taste tests as well as free coffee and snacks.

“I like attending these shows because I always want to see if there are new things we need to get,” Hunn says. “For the holidays, there may be something I see here that I can get in before that rush comes. We plan on walking through the entire show floor for what we need.”

This was the first reunion for Victor Lugardo, general manager of a JC Licht, a paint company with 35 locations in the Chicago area. When he started as manager, his location decided to add a hardware store to its offerings and Lugardo says attending the show is a great way to learn even more.

“The reunion has been great,” Lugardo says. “My first week in the industry I attended the National Hardware Show in Las Vegas, so it has been a bit of a whirlwind, but I’ve learned a lot since I came in. Coming to this show has allowed me to sit down and keep working with True Value on marketing and merchandising. They are really helping us get started.”

Renee Changnon is the retail outreach coordinator for NRHA. She meets with retailers in their stores and at industry events and introduces them to the services NRHA provides. Renee previously worked as a member of the NRHA communications team. She earned a degree in visual journalism from Illinois State University, where she served as the features editor for the school newspaper. After college, she implemented marketing and promotions initiatives at Jimmy John’s franchise locations across the country. She enjoys exploring books with her book club, Netflix marathons and hosting goat yoga at her apartment complex. Renee Changnon 317-275-9442 rchangnon@nrha.org
Previous 10 Tips for Completing an Honest Store Critique
Next 10 Lessons I Learned While Traveling