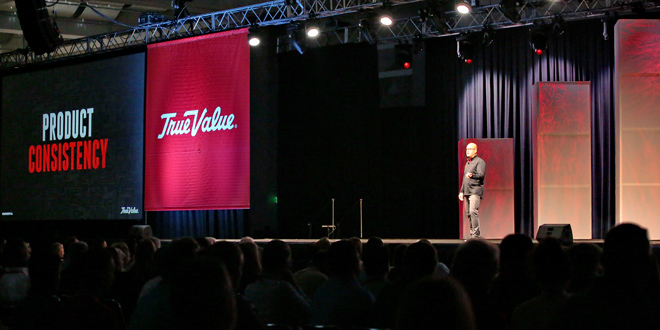 The True Value 2022 Fall Reunion brought together retailers from around the country to shop hot buys, discover new products and trends and hear from executives on where the company is heading in 2023.

Reunion kicked off with a general session where True Value CEO Chris Kempa announced an expanded partnership with Toro and the addition of Kelly Megel to the leadership team as senior vice president of marketing.

Over the last two years, True Value has reduced its debt by over $100 million and is carrying the lowest amount of debt since 2017, Kempa says. He discussed changes the business is making to streamline how retailers do business, like the RyderShare app with real-time shipping and delivery notifications and a shift to New Netwarehouse, an online ordering tool.

A record number of potential True Value store owners were also in attendance.

“Since the beginning of 2021, we’ve signed nearly 600 new stores,” Kempa says. “That is more new stores in the last two years than the previous five years combined. We also had 105 new stores opened by existing retailers.”

“Compared to the highest quality, most expensive can of paint that exists in the market, we believe LimitLess is not only as good, but better, and it’s two-thirds the price,” Kalnitz says.

“Our assortments were created around an idea we refer to as jobs theory, which shifts the focus of assortments from broad product categories to the specific jobs DIY consumers are doing,” Kalnitz says. “This approach will allow retailers to better assist customers in completing a specific job from beginning to end and to be recognized for this ability.”

Kalnitz also talked about the company’s focus on the aging-in-place market, which has resulted in a hardware channel exclusive with Compass Health and its Carex brand.

“We’ve also prioritized partnering with our vendor community and invested over $100 million in inventory to create the best products in the industry,” Kalnitz says. “Since the start of this year, True Value has improved its product flow rates by over 20%. Additionally, the strategic investments we’ve made in our core planogrammed offerings have increased our fill rates of our most important programs to over 90% for the first time in over two years.”

Eric Lane, senior vice president of sales for True Value, touched on the decrease in transactions and traffic across the industry following the pandemic and how True Value would help retailers drive those numbers back up.

“We believe that one of the solutions is to build a comprehensive marketing program that focuses retailer efforts on inviting people back into stores and driving store traffic,” Lane says. “In 2023, we are upgrading our Bargain of the Month Event, otherwise known as BOM, which includes eight basic core items offered at discounted prices. In 2023, BOM will be auto-shipped to your store.”

True Value focused on bringing new and interesting products to its retailers while providing deals on familiar products.

The New Product Arena was a popular area during Reunion with many retailers making it a priority area to explore on the show floor.

Megan Menzer, owner of Newtons True Value Hardware in Cherryvale, Kansas, says she came to Reunion with the goal of finding new products and left with several ideas for items to stock, including rechargeable heated stadium seats and a moving dolly.

“We sell major appliances at our store, so the dolly we found, the Rhino Cart, will be a new and helpful addition,” she says.

DJ Jesrani of Golfcrest True Value Hardware in Houston, Texas, was also on the hunt for new products and the best pricing on products already sold in his business.

“Reunions are a great place to explore new products while securing great pricing on the products I know I already need,” Jesrani says. 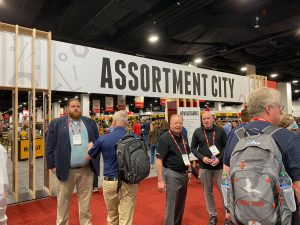 Assortment City featured 24 new assortments in categories such as hardware, grilling, plumbing, home automation and outdoor power equipment. It included a DeWalt signature assortment and several well-known outdoor cooking brands, and others that are new to Reunion. Many of the assortments being focused on were chosen due to retailer interest and the opportunity they present moving forward, Kalnitz says.

In-Person and Loving It

With events like the Darius Rucker concert and Grill ’N Chill, retailers had plenty of opportunities for networking and conversations over the weekend.

Being in person also allows retailers to become more familiar with products and see how they could be a good fit for their customers.

“Our retailers have let us know they really like to touch and feel the products available, and that is not something you can replicate on a virtual platform,” Kalnitz says.

“It’s in our hometown of Chicago, and it’s our 75th anniversary,” Kalnitz says. “I believe it will be something special.”

Carly joined the NHPA staff in 2021 as an associate editor. Born and raised in Indiana, Carly earned a B.A. in English from Indiana University Bloomington. She enjoys reading, hiking, and cheering on the Indiana Hoosiers.
Previous Blish-Mize Fall Market Highlights Deals, Future Plans
Next 5 Must-Have Products to Keep Drawers Organized