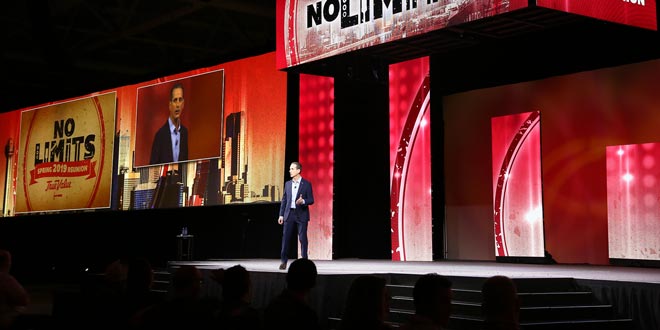 True Value Sees ‘No Limits’ to Growth at Spring Reunion

Thousands of retailers from across the world gathered in Dallas for the True Value 2019 Spring Reunion, which was held Feb. 21-24 at the Kay Bailey Hutchinson Convention Center.

It was a bustling show floor, with more than 1,000 vendors and exhibitors displaying their products to retailers looking to enhance their inventories. Beyond products, True Value University helped retailers connect to training resources and attend educational seminars to learn retail best practices.

The 2019 Spring Reunion was the second event to be open to all retailers regardless of wholesale affiliation following ACON Investment’s strategic investment in the company in 2018.

At the show’s general session, True Value president and CEO John Hartmann said ACON Investments had proven to be “great partners,” and that the financial support had enabled members to invest in their businesses and increase sales in the process.

“With the transition disappearing in the rearview mirror, we’re finding it easier than ever to bring in new customers,” Hartmann says. “We welcomed over 300 retailers to the True Value family in under eight months last year, and 168 so far this year.”

Hartmann’s talk and bold signage throughout the show proclaimed a theme: “No limits” in retailing.

No Limits to Products

Dan Kanis, owner of Nelson Agri-Center True Value in Viroqua, Wisconsin, attends every True Value Reunion. He says the product selection is one of the major motivations for visiting, but he’s also interested in hearing company updates directly from Hartmann.

“This year, we brought five department managers. We like them to come and meet the vendors firsthand. They come loaded with questions. The main thing I believe is that if they discover a product and buy it, they’re going to sell it. We try to bring as many managers as we can, it’s worth it,” Kanis says.

Before the Spring Reunion, True Value confirmed it would guarantee deal prices, despite government-issued tariffs, through its Buy With Confidence Guarantee.

New to the show floor this year was The Pro Yard, where retailers perused pro-focused lumberyard assortments to help gain a foothold with their local construction and renovation professionals.

Another new addition was the Winter Village area, where retailers could get a head start on holiday decorations. The products ranged from traditional decorating items to Christmas trees outfitted with voice-command LED lights.

Lori Colgan, owner of Brown’s True Value in Atwood, Kansas, says the tech advances in holiday decorations caught her eye immediately. She never misses a Reunion, where she says she can take advantage of special deals for her business and catch up with other business owners.

“The Reunions are a good time to get away and refresh. They have wonderful entertainment, and I can see friends from all over the country. It’s a good networking opportunity,” she says.

Kanis says his team benefited from the product selection, but also saw the Reunion as a chance to reconnect with other retailers and True Value itself.

“You always get your batteries recharged when you come to things like this,” he says.

No Limits to Distribution

At the general session, True Value executives outlined how new business initiatives would directly benefit members. The company took the opportunity to announce the construction of a new distribution center in Hanover Township, Pennsylvania.

The Pennsylvania distribution center is part of a $150 million investment toward modernizing the company’s hub-and-spoke supply chain, True Value states. When finished, the state-of-the-art distribution center will measure more than 1 million square feet. The facility is currently under construction and slated to open this fall. True Value says it will help area retailers maintain high in-stock product rates.

Hartmann says the new facility is the first ground-up distribution center for the company in more than 30 years and symbolizes new potential for all True Value members.

“The investments we’re making in our supply chain are unprecedented,” Hartmann told attendees at the general session. “Our supply chain is the heart and lungs of how we support you.”

No Limits to Technology

Also at the general session, Hartmann and other True Value executives detailed how a new marketing app would streamline pricing and advertising for members.

“We have been leading the industry with modernizing marketing support: Building cutting-edge digital capabilities, allowing you vast control over the customization of our offers and we’re not slowing down,” Hartmann says.

“We know every store is different,” Jozwik says. “That’s why we were the first in the industry to take a more hyper-local approach with our digital marketing. This lets you spend your marketing dollars in the area around your stores.”

Take a look at the 2019 Spring Reunion highlights in this video, courtesy of True Value.

No Limits to Sales

True Value also took the opportunity to announce it was doubling its sales team to better support members.

Eric Lane, vice president of strategic and specialty accounts, says the bolstered sales force is just one of the ways the company is supporting its members.

“In 2019, we’ll continue to build our numbers, our strength and our brand,” Lane says. “In this new model, we’re adding more retail consultants and at the same time, cutting in half the number of accounts they’re responsible for. Their role will be to service you and grow your True Value business.”

Lane says the doubling of the sales team will be completed in phases beginning in April.

“I have personally experienced through the strategic account model how serving you with increased and more-focused visits along with detailed discussions can deliver double-digit compound annual growth. With this effort, we are very much looking forward to deepening our relationship with you,” Lane told general session attendees.

No Limits to True Value

Both Kanis and Colgan say they saw the Spring 2019 Reunion as a chance to take stock of True Value and felt reassured about the company’s future after Hartmann’s address to True Value members.

“Last year, there was some nervousness because of the deal, but we’ve seen the year go by and everybody’s relaxed and excited. When we hear how many new people are here, the future seems really promising,” Colgan says.

Above all, Hartmann and the True Value team underscored their belief that True Value and its members are on an upswing of growth and new retail possibilities.

“We took it a bit on the chin over the last few years leading the way with critical investments,” Hartmann says. “But today, we have the ability to go faster and do it in a structure that doesn’t place it on your dime any longer. True Value is already focused on the future; together, we are a strong, formidable team. Today isn’t about finding your limits, it’s about realizing you have none.”

True Value’s Fall 2019 Reunion will be held Oct. 3-6 at McCormick Place in Chicago.

Todd is trends editor for Hardware Retailing magazine. He graduated from Indiana University where he majored in journalism and French. Throughout his career, he has aimed to highlight small businesses and their community value. He joined NRHA in 2017.
Previous Retailers Find Unique Opportunities at Orgill’s Spring Dealer Market
Next Boston’s Ace Hardware Finds Fresh Growth