Home » Promotions » Turning Hardware into a Work of Art 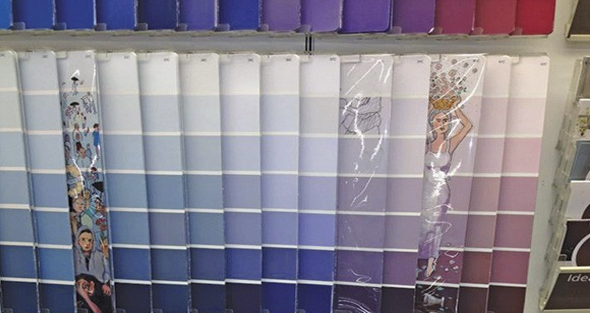 Turning Hardware into a Work of Art

Over the past couple months, customers coming into K&B True Value looking for tools and paint were probably surprised to find something a little different: tools, paint and other products with an artistic twist.

The creative and entertaining environment was just what Jared Littmann, owner of the Annapolis, Md., store had in mind when he teamed up with a group of local artists to host an art show in his store.

“The artists hosted a show at our store 10 years ago when my in-laws owned the store, and the group wanted to do it again,” Littmann says. “I was thrilled to have our store be a part of the show.”

The artists added their touches to products throughout the store, putting their own twists on hardware by putting faces on shovels, decorating buckets and more.

The art show was originally planned as a one-night-only event, which store staff marketed through email and the store’s Facebook page, but because of the art’s popularity with customers, the pieces were left up at the store for a month.

All pieces of art were for sale, and because they stayed installed longer than originally planned, store staff put together a scavenger hunt, where customers tried to find all the artwork in the store. (To see more of the artwork, visit the store’s Facebook photo album.)

“We had a few participants who got the list and filled out what aisle they found each piece of art in,” Littmann says. “The scavenger hunt took them 15 or 20 minutes, and anyone who completed it got a gift card to our store.”

He says a few of the artists’ pieces have sold. “The artists seem to be happy to have had a venue to show their work and get their names out.”

It’s helped his store traffic, too: “We had some increased traffic the night of the art show, and there was a slight increase in sales.

“The event introduced our store to some artists and local residents who hadn’t been here before,” he says. “Even for some customers who had been here, they hadn’t explored the whole store and were surprised about how many products and categories of products we carried that they didn’t know about.”

Littmann says the artists are hoping to get a bigger group together to participate in next year’s event. “It was a fun event and a neat way to show off local artists’ work and bring more customers in to our store.”

Liz is the special projects editor for Hardware Retailing magazine. She reports on news and trends, visits retailers, and attends industry events. She graduated from Xavier University, where she earned a degree in English and Spanish and was a member of the swim team. Liz is a Louisville, Kentucky, native who lives in Indianapolis with her husband and two children. She enjoys swimming, reading, doing home improvement projects around her house and cheering on her two favorite basketball teams, the Kentucky Wildcats and the Xavier Musketeers.
Previous A Rose Is a Rose—and a Mother’s Day Promotion
Next Food for Thought: Taking Charity to the Next Level