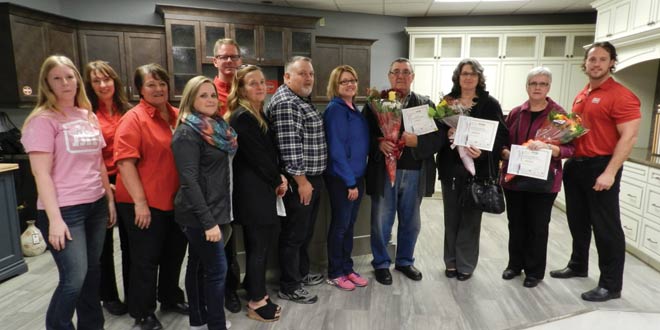 “What homeowner wouldn’t want the opportunity to give their ugly kitchen a makeover?” This was the question the team at Geerlinks Home Hardware Building Centre turned into an opportunity. The store is unique in that it also has a home furniture section.

“We wanted to let the community know we can design, supply and install kitchens,” says Murray Cutler, who helps with marketing and advertising for the store, which is located in St. Thomas, Ontario. “We had heard of some other stores that had done a similar program, so we did some research to develop this one.”

The contest asked participants to submit two pictures of their ugly kitchens on the store’s website and provide a reason why they deserved to win the grand prize, a $12,900 kitchen makeover completed by the in-store designers.

The contest was promoted on Facebook, website, in-store, in the local newspaper and on the radio, resulting in more than 100 entries.

After submissions were gathered, family, friends and anyone who visited the store’s website could vote for the ugliest kitchen, which helped narrow the contestants down to 11 finalists.

A representative from Home Hardware, the mayor of St. Thomas and an executive from the cabinetry company the store works with were the final judges. They crowned the winner at a special event, and the other 10 participants received coupons to help them in their makeovers.

The idea for the promotion was developed in August and launched in September, and it was a great success.

“We’ve certainly had additional people come in and purchases have increased since promoting this contest,” says Murray.

Along with driving sales and purchases, the promotion increased awareness of the store’s furniture department, he says.

“The promotion got a lot of buzz online and raised awareness about the store,” Murray says.

“We also invited in the local media for the winner reveal, and then it became a story in four newspapers and on the radio,” he says.

Lynnea is the senior graphic designer for Hardware Retailing magazine, where she works on the layout and design of the magazine and other custom publications. She also does print design for NRHA’s marketing materials, programs and other in-house projects. Lynnea graduated from Ball State University with a degree in Graphic Design. She lives in her hometown of Greenwood, Indiana. During her free time, she enjoys designing, painting, reading and volunteering at her family-owned childcare facility.
Previous Ways to Succeed With Social Media (Infographic)
Next Exclusive Q&A: Ace to Partner With Lowe’s in Canada