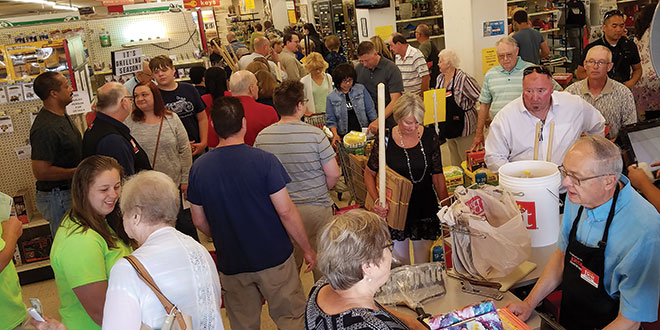 Umber’s Do it Best Hardware Takes on a Mission

A local pastor had a tall order for Dave Umber, owner of Umber’s Do it Best Hardware in Fort Wayne, Indiana.

The pastor asked Umber to stock his store in three days with enough tornado relief supplies for nearly 300 people to buy in 90 minutes. He also asked Umber to open early on the upcoming Sunday morning to accommodate members of his church, Avalon Missionary Church.

A tornado had destroyed a church building in Ohio, and Avalon Missionary Church was eager to help the Ohio congregation recover.

Umber said yes, despite the tight turnaround. He also decided to offer a 10 percent discount on all tornado relief purchases. “You can’t turn down an opportunity to help others,” he says.

The pastor provided a list of cleaning supplies, shovels and other products the Ohio church needed. Umber called his distributor to ask about making an unusually large order on short notice.

He had eight hours to work with employees to estimate how many products to buy and then submit the order.

Umber also had staffing needs to address. He needed workers on hand to unload and sort about 2,000 more products than a typical delivery and then serve a crowd that would cram the 10,000-square-foot store.

When Sunday came, the store had more than twice as many employees on the salesfloor as usual. The church members showed up en masse, buying everything on the list, plus some.

“We’ve had large promotional events, but we had months to plan,” Umber says. “None were as intense as this.”

Kate is profiles editor for Hardware Retailing magazine. She reports on news and industry events and writes about retailers' unique contributions to the independent home improvement sector. She graduated from Cedarville University in her home state of Ohio, where she earned a bachelor's degree in English and minored in creative writing. She loves being an aunt, teaching writing to kids, running, reading, farm living and, as Walt Whitman says, traveling the open road, “healthy, free, the world before me.”
Previous Aluminum Grill and Smoker
Next Now Available: 2019 Cost of Doing Business Study