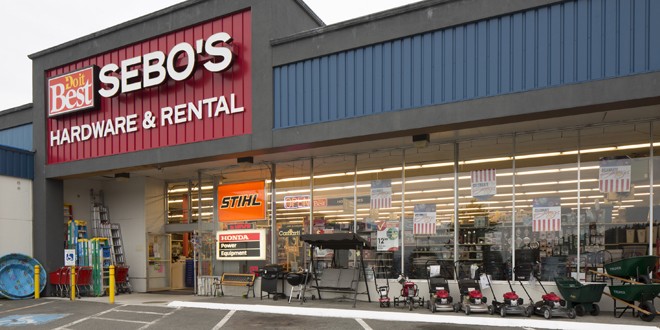 Carl Burkgren, manager of Sebo’s Do it Best Hardware & Rental in Anacortes, Washington, has become well-known around town—and not just because it’s a small town.

Burkgren has become the face of Sebo’s ads, appearing almost every month for the past year. He’s been featured as June Cleaver for a Mother’s Day ad, a chocolate bunny for an Easter ad, and more.

“We started doing coupons and wanted to do something a little different to give it some life, so we put Carl’s face in there,” says Dave Sem, owner. “Carl’s a good sport about it—in fact, he’s given us different ideas. We let him approve everything.”

Burkgren doesn’t mind getting recognized, which happens fairly often. “Everyone seems to know me at the grocery store,” he says. “My bank cut out half a dozen of one of the ads and put them up on a board in the office. I’ve had people who told me they cut out the ads and put them on the fridge. One customer even framed one.”

Clearly, the strategy is working; some customers walk into the store, ad in hand, and ask specifically for Carl. “After Easter last year, we had customers who came in and said they wanted to see the chocolate bunny,” Sem says.

Sem, Burkgren and the rest of the staff continue to come up with ideas on how to use Carl’s face, as well as those of other employees, in ads.

“We had one guy in our rental department whose face we put in an ad to make him Uncle Sam,” says Sem. “And there was another employee who we used for a witch for an ad we did around Halloween. But Carl’s our main face for the ads.”

And Burkgren is happy to help. “It’s fun to do, and the ads are doing really well at the store,” he says.

Liz is the special projects editor for Hardware Retailing magazine. She reports on news and trends, visits retailers, and attends industry events. She graduated from Xavier University, where she earned a degree in English and Spanish and was a member of the swim team. Liz is a Louisville, Kentucky, native who lives in Indianapolis with her husband and two children. She enjoys swimming, reading, doing home improvement projects around her house and cheering on her two favorite basketball teams, the Kentucky Wildcats and the Xavier Musketeers.
Previous Consumers Still Like Benefits Of In-Store Shopping
Next Turning Merchandising Into Offbeat Art