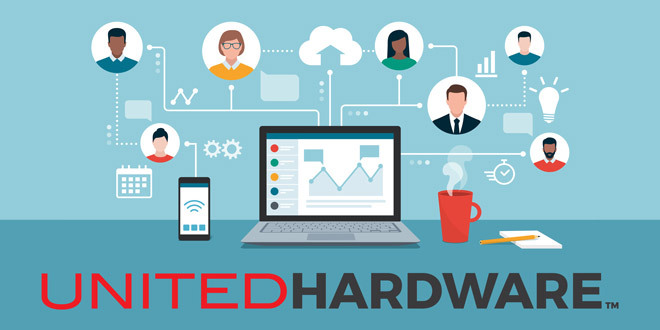 While the first half of the year has been full of economic uncertainty and a global pandemic, that didn’t seem to dampen the enthusiasm of retailers attending United Hardware’s Fall and Winter Buying Market, July 27 through August 2.

But instead of filling convention center halls as has been the case in years past, this time attendees joined the event from their store offices and kitchen tables. United Hardware hosted its first virtual market, which included virtual booths where retailers could browse for new products and set up meetings with vendors. Retailers could also listen to pre-recorded messages from company executives, watch training videos, attend live meetings, see the annual shareholders’ meeting and take in an evening happy hour. While the medium may have been different, retailers reported they were still engaged with the market and still looking for ways to invest in their businesses for the remainder of 2020.

“After a slow start due to milder winter weather in our geographies and the uncertainty surrounding the early stages of the pandemic, sales have been strong through the spring and summer selling seasons,” Doug Audette, president and CEO of United Hardware, says. “Our customers have been nothing short of heroic with their response to the pandemic. They have gone above and beyond in demonstrating how independent hardware retailers are essential to their communities and our economy.”

Joni Van Essen at Tinklenberg Lumber and Hardware in Edgerton, Minnesota, is one of many retailers reporting better-than-usual sales for the year.

“While some of the building activity has slowed, many of those contractors are doing remodeling jobs rather than large projects,” she says. “We’re also getting a lot more homeowners going through the lumberyard as they are trying projects they may not have tried before. As busy as we were, it was difficult to be out of the store, but we were able to sit down in the evenings and log on to the market. Vendors were very good about answering emails with our questions.”

Like many wholesalers, United Hardware pulled together its virtual market in a relatively short amount of time, having announced the switch from an in-person event to an online one in May. A successful event gave them the opportunity to develop technology and be more versatile for the future, says Audette.

“The way our United Hardware team members, retailers and vendor partners came together to create a market experience that was beneficial for all parties despite the obstacles demonstrates tremendous resilience and shows the potential we have to do more great things for our retailers and their communities in the future,” he says. “Our vendor partners have been extremely supportive of United Hardware and our customers throughout 2020, especially in how they participated in our virtual market. We can’t thank them enough for the way they stepped up and participated at such a high level.”

Lloyd Boeder, owner of Hartmann’s Hardware Hank in Pierz, Minnesota, was one of the United Hardware customers logging in to the virtual market. He says that despite some initial apprehension about how the event would work, he found the process easy.

“The market was very easy to navigate. All of the categories and special buy areas were separated just like they were in the physical market,” he says. “We typically use the discount areas to increase our inventory and give us new items we otherwise wouldn’t have tried if we had not had a discount.”

“We were able to work the market like we normally would,” he says. “All of the vendors I called got back to me very quickly. We were also able to find new planograms to freshen up some of our older stock.”

While most attendees might agree that a virtual market is a much different experience than an in-person event, they also appreciated United Hardware was able to do it successfully.

“We certainly miss meeting other retailers and walking the showfloor,” Andrew Tickle, store manager at Mills Hardware and Feed in Arnold, Nebraska, says. “But United created a very functional system that worked very well and gave them a good starting point for growing in the future.”

Jesse Carleton has visited independent hardware retailers, conducted original research on the industry and written extensively about the business of hardware retailing. Jesse has written for more than a dozen of NHPA’s contract publishing titles, all related to the hardware retailing industry. He also was instrumental in developing the Basic Training in Hardware Retailing courses now used by thousands of retailers across the country.
Previous Natural Wood Coatings
Next Industrial Tie Down Straps